If I pull my knife? And he is carrying a gun?

“If I pull my knife? And he is carrying a gun? Will this cause him to pull his gun out? Will I cause the problem to escalate?”

An attendee to a seminar in Kentucky, someone with zero martial or martial arts experience, just a regular guy legally walking around with a gun and a knife, asked me this question.

What did I say? I said “yeah, that could happen.”
“That’s pretty messy,” he said.
“Yeah,” I said.
And everyone stared at me for words of wisdom and solution. I have none.

So often people want Magic Bullet answers to a lot of self-defense questions. There’s always big talk in the self-defense industry about “avoidance.” If too late to avoid, then next up in the event list is what they call “de-escalation.” Avoiding and de-escalating a common knucklehead before a fight starts is a cottage industry. Some folks confidently dole out solutions to confrontations in three to five steps or present mandatory checklists.
“Say these things!”
“Do this!”
“Do that!”
“Stand like this!”
“Don’t ever….“

Now, I think it is certainly good to be exposed to all these ideas and methods. Sure. Do so. But as an obsessed skeptic, I see the caveats beyond the advice. I don’t know about certain kinds of solutions, magic words, or stances when confronted or attacked.

I have investigated a whole lot of crimes through the decades; and while there are identifiable patterns and surprises, chaos can sure still reign supreme. But let me summarize by calling it all “situational.”

In the end, solutions are situational. Like calling plays in a football game, it depends on the situation. How you stand and what you say or do should be situational. Custom-built. (This essay is primarily about pulling out a knife but does and could certainly relate to pulling a pistol, too. It’s just that if this was a “pistol-centric” essay, I would be writing more about pistol situations.) 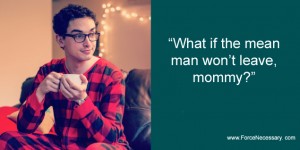 So there’s an argument! Then a fight! Given you have already performed all your pop/psych avoidance and de-escalation steps. You are armed under your coat or in your pocket with a knife or even a gun, and this verbal stuff just ain’t working! The mean man won’t leave! Or worse, the men (plural) won’t leave. Do you pull that knife out? That weapon out? There are some situational concerns with doing this; and these concerns certainly do involve his possible knives and guns and the overall escalating ladder of weaponry, violence, and legal problems.

Fact: Some people do leave. For many a year now, 65% to 70% of the time when a knife or pistol is pulled in the USA, the criminal leaves you alone. (old DOJ stats) Simple statement. I have often heard the easy average of 67% used (sticks, by the way, are not in these study figures.) I must warn folks that this is not as clean and simple an escape as it sounds. There are many emotional, ugly events that happen in this weapon presentation / confrontation, even if the bad guy does leave. In my experience and investigation, if the criminal is alone he might be quicker to leave, if he is in or around a group, “his” group, he puts on more of a show before leaving. Trauma and drama. We discuss these details in certain topical seminars and other specific essays.

Fact: Some people are armed. General USA stats quoted for many years past say that 40% of the time the people we fight are armed. A few years back the FBI upped that anti. More being armed! And another gem to add in is that 40% of the time we fight two or more people. Hmmm. So 40% or more armed times 40% multiple opponents. Not a healthy equation. Lots of people. Lots of weapons. Lots of numerical possibilities. The “smart money” in the USA or anywhere else is always bet that the opponent is armed.

Time equals “when” and reason equals “why.” Two different questions. The motive and the moment to move. Either way, remember …

For the rest of this article, read Fightin’ Words, click here