“When I was a combatives instructor there were a couple of questions I heard on almost continuous loop…’what style of fighting really works on “the street?’ or ‘who is the best instructor out there’? Well, for my money, Hock Hochheim is the real deal. Second to none. He’s trained with the best, but he also took all of his vast and diverse encyclopedic knowledge and real-world experience and broken all of the elements down in an analytical and systematic, easy-to-understand way. Not just reductionism though…he has unique insights and a trial-by-fire methodology that make the tactics come alive. Brutal, effective, efficient, and fun as heck to learn! Hock–I’ve said it before, but I’m saying it again–YOU ARE THE MAN!!” – Ron Goin, lifelong martial artist, Kentucky USA

“Every week there are billions of safe, successful interactions between all kinds of people. But a small percentage of our society is sick, riotous, deranged and obsessed, criminal and just plain evil. And sometimes force is necessary. When citizens must act, now more than ever they must move with discretion, reserve and with some legal wisdom. I have been in the Army military police and in Texas police work, and the martial arts, all of my adult life, and most of that time as a criminal investigator. I know things about these problems that many others don’t. Any knucklehead can show you how to punch, kick and shoot, but there’s more to situational survival, be it “use of force,” or “rules of engagement, or “pre-fight and pre-crime.” The psychology and physicality of “with, without and against,” mixed-weapon fighting, from standing on down to the ground. I hope to pass this information on to you in seminars, books and films.” – Hock

W. Hock Hochheim has over 51 years experience in military, policing and martial arts. As an Army military police patrol officer and investigator, and as a retired Texas patrol officer and detective, and as private investigator and protection/bodyguard, he has worked all those years in “line operations” never taking a promotions exam or admin job. He possesses a unique experience and savvy that very few other instructors have, all blended with a career in the martial arts dating back to 1972 and the earning of several black belts in various Pacific Island/Archipelago martial arts from the Philippines, Hawaii and Japan. He has forged his Force Necessary courses from the military, the police, the martial arts and the aware citizenry, as each group knows things about fighting that the others do not. Once, a police field training officer and a continuous guest instructor at Texas police academies, he has taught at police academies for police agencies, be they street or SWAT, or counter-terrorism units in the US, South Africa, England, Ireland, Belgium, Germany and Australia.

Hock has been a paid consultant trainer for the US Army, Navy, Marines and Air Force. He’s instructed at the Special Operations base in Italy, counter terrorism units in Belgium and Germany. Now in 2023, he currently teaches some 15 seminars a year (though down from 24 after the ravages of Covid) in some 10 or more countries as far as China and Australia. Many of the martial and survival topics popular in the last few years and under newer cool, names, Hock has already been teaching this same material for…decades.

W. Hock Hochheim is a former U.S. Army, military police patrolman and investigator, a former Texas patrol officer and detective, and former private investigator. During his career, spanning three decades he worked in “line operations” only, and he’s investigated more than 1,000 crimes and arrested nearly as many suspects. He has graduated from numerous, national Assault and Violent Death police schools and street survival courses. As an officer and later as a private investigator, he has also organized protection and security for famous authors, politicians, musicians, TV and movie stars. Over the last 51 years Hock has studied martial arts and hand, stick, knife and gun combatives, earning numerous black belts in multiple systems.

Then in 1996, Hock founded “Force Necessary,” a training company that teaches situational, event-based, scenario-based fighting tactics to military, police and citizens. Hock has written prolifically about martial arts, psychology, sports and history in countless magazines and books. He is quoted frequently, and his ideas, outlines and plans used by experts worldwide. 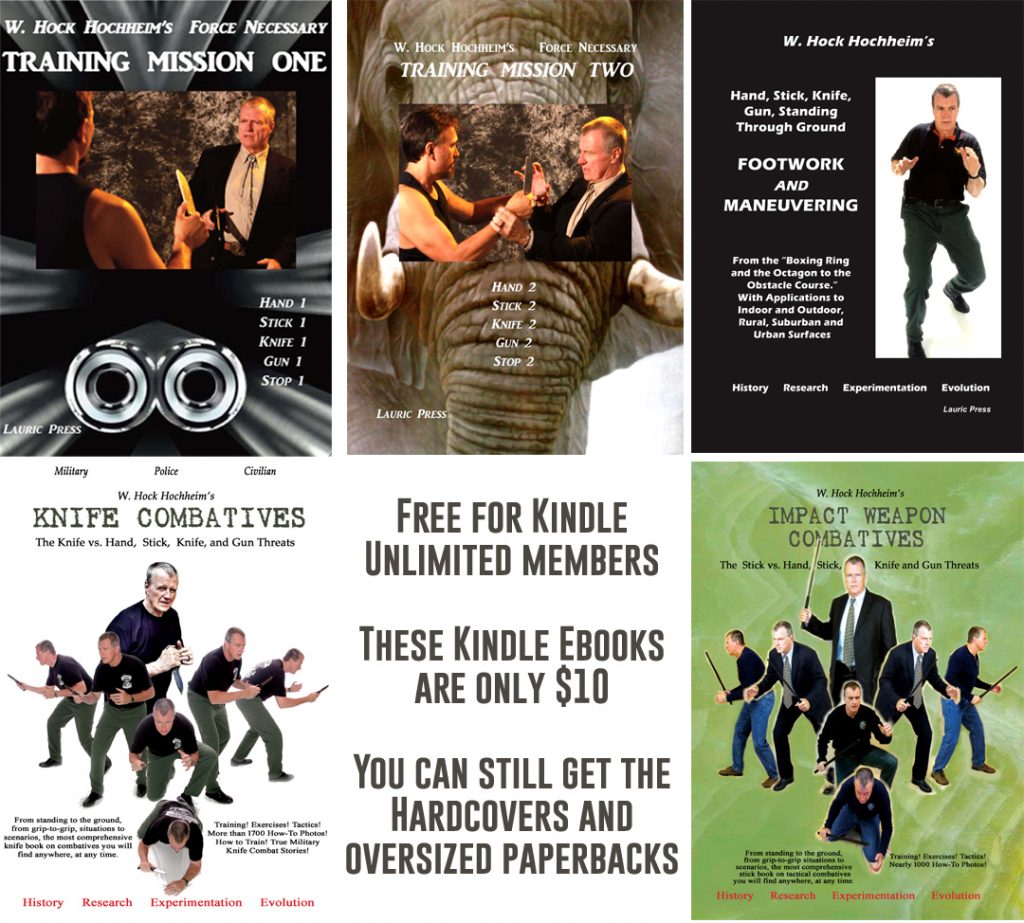 These books are available on Amazon Kindle for FREE if you a Kindle member or only $10! Or you can get the oversized paperbacks, or the full color, collectable, hardcover textbooks. For information about books, training video downloads, seminars in your area or just to ask a question, email: Hock@SurvivalCentrix.com