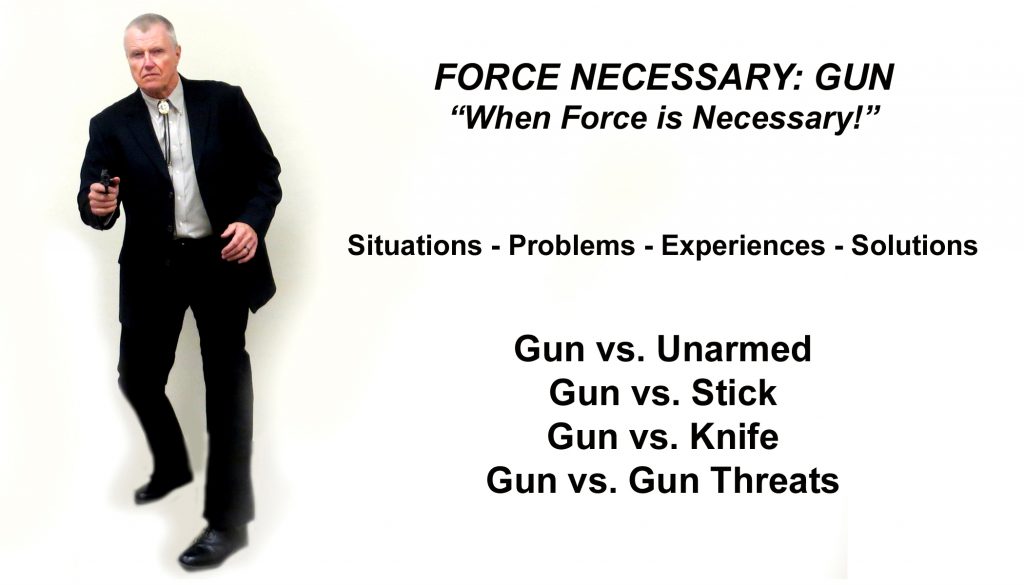 Hock is a military and police veteran with multiple black belts. He currently tours some 11 allied countries conducting some 25 seminars a year (barring these Covid times) teaching hand, stick, knife and gun combatives. He has been a paid consultant for four branches of the U.S. military and he has taught in numerous police academies as close as a regular police academy instructor in Texas and as far away as England and South Africa, and for prestigious professional groups like ILLETA and the IALEFI (International Association of Law Enforcement Firearms Instructors), special operations and counter-terrorism units in Italy, Ireland, Belgium and Germany. Not to mention countless civilian and martial groups in 26 years. All with simulated ammo.

Since 1995, his specialty is any safe, simulated ammo training in any form of simulated, interactive ammo available to sharpen the reality of encounters. Airsoft, gas, electric, rubber, Simunitions, any affordable and practical way to teach in your indoor or outdoor environments and facilities. Given your environmental restrictions, we use ANY safe ammo to “move the learning ball up the field,” without hurting you, your cars or your buildings. You will get smarter!

“External Focus” in gun fighting is phrase coined years back by expert researchers from the prestigious Force Science Institute, Minnesota University of Mankato group studies. It means you must worry about the armed opponent. A lot. A lot more. Perhaps a lot more than you do in fixated, paper target shooting. If you are not a ‘hobby-est,’ a ‘plinker,’ or a ‘bulls-eye competitor,’ rather you are training for fighting crime or war and you are a self defense ‘survivor-ist,’ after you learn gun mechanics and marksmanship skills for a sufficient period, you must also include levels of human-versus-human interactive, fighting. You too must be a target receiving incoming “rounds.” In training, that “incoming” might just be from a tennis ball machine, Airsoft, paintball, or even a rubber band gun in some training! Money, gear, location and doctrine dictates what you can safely use. But someone-something needs to be firing back at you to learn more, realistic gun fighting. Living, breathing, thinking opponents are necessary for any credible gun combatives. Oddly, this is statistically uncommon training in comparison to target shooting in hours spent. The range-business-model reigns supreme.”- Hock

“Aside from the fact that police and military were always struggling with safe ammo to train with, in the 1990s it was declared that I was “playing with toys” by many gun folks. But as the years went on, when it was discovered that major players and teams were using all kinds of simulated ammo, crisis rehearsals in raids and training that dimwit “toy” mindset slowly disappeared.” – Hock

“I want you to range shoot as often as possible to learn and-or refresh how to run your gun. Live fire training is mandatory and should be continuous but this training does not replace interactive, simulated ammo training versus moving, thinking people who are shooting back at you. The enemy is a 3-D, moving, tricky, unique human body with a mind full of independent thought, running, grabbing on you or shooting back, all in a cluttered indoor or outdoor, urban, suburban and/or rural landscapes.” – Hock 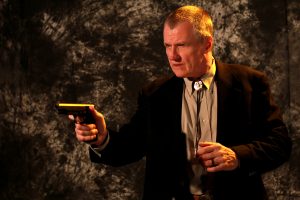 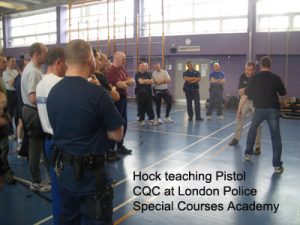 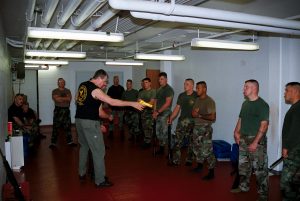 Hock with US Marines in Quantico, Virginia.

Hock has taught interactive, simulated ammunition gun seminars to citizens, the police and to military units all over the world. Learn through the chaos of simulated, situational combat!

“Remember, the one who plans, cheats, outsmarts, connives, fools and deceives can win the gun fight. Fortune favors the prepared.” – Hock

“By now you may already know that I do not teach marksmanship, but rather interactive scenarios with all sorts of simulated ammo. I have been shooting pistols and rifles since 1969 through the US Army, Texas policing and personal training, but I have not the expertise, the care, skill or the patience to teach marksmanship. I really, really admire those that do and I partner with the best of these talented friends to cover that vital, important material. Such live fire as…(and you know I cannot list ALL of them here! Paul Howe, Dave Spaulding, Tom Givens, PFC in Vegas, KR Training in central Texas…) 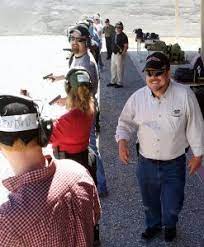