W. Hock Hochheim is a former military police patrolman and investigator, a former Texas patrol officer and detective, and former private investigator. During his career, spanning three decades he worked in “line operations” only, and he’s investigated more than 1,000 crimes and arrested nearly as many suspects. He has graduated from numerous, national Assault and Violent Death police schools and street survival courses. He also organized protection and security for famous authors, politicians, musicians, TV and movie stars. Over the last 40 years Hock has studied martial arts and hand, stick, knife and gun combatives, earning numerous black belts in multiple systems.

In 1996, Hock founded Force Necessary, a training company that teaches situational, event-based, scenario-based fighting tactics to military, police and citizens. Hock has written prolifically about martial arts, psychology, sports and history in countless magazines and books. He is quoted frequently by experts worldwide. He currently teaches some 30 seminars a year in 13 allied countries.

For more than 16 years, Hock has also authored a very popular blog read by tens of thousands. He is known as an educator, entertaining skeptic, and pioneer, martial, myth-buster by citizens, military, police, and martial arts experts worldwide. You cannot find all these special studies, articles and essays on his blog page as they are collected in book Fightin’ Words, a collection of essays and articles by Hock about his life-long, worldwide quest to uncover the best, base-line, fighting tactics, strategies and skill-developing methods. These essays are based on his travel, study and research of the psychology and physicality required to successfully fight criminals and enemy soldiers. The book is about fighting, (or “fightin'” since Hock is a Texan and speaks like one.) He dissects elements of survival, self-defense, war, crime, martial arts and combat sports. He explores the changing terrain of these systems and how they evolved.

“W. Hock Hochheim has over 40 years experience in military, policing and martial arts. As an Army military police patrol officer and investigator, and as a retired Texas patrol officer and detective, and as private investigator and protection/bodyguard, he has worked all those years in “line operations” never taking a promotions exam or admin job. He possesses a unique experience and savvy that very few other instructors have, all blended with a career in the martial arts dating back to 1972 and the earning of several black belts in various Pacific Island/Archipelago martial arts from the Philippines, Hawaii and Japan. He has forged his Force Necessary courses from the military, the police, the martial arts and the aware citizenry, as each group knows things about fighting that the others do not. Hock has been a paid consultant trainer for the US Army, Navy, Marines and Air Force. He has taught at police academies for police agencies, be they street or SWAT,  in the US, South Africa, England, Ireland, Germany and Australia. He currently teaches some 25 seminars a year in 11 countries as far as Japan, China and Australia. Many of the martial and survival topics popular in the last few years and under newer, cool names, Hock has already been teaching for decades. He was also a police training officer, and law enforcement academy instructor.”

3: The Writing Years: Non-Fiction and Fiction Books (and articles)

Hock was a military and city patrol police officer in Oklahoma, Arkansas, South Korea and Texas, graduating the US Army Military Police Academy in 1973 and then the Texas Police Academy in 1978. Through the years he was also a police training officer, and law enforcement academy instructor on criminal investigation, mechanics of arrest and arrest warrants.”

Hock spent most of this police time in the  US Army and Texas police force as an investigator/detective in Oklahoma and Texas working all categories of crimes and drugs. Hock never took a promotional exam and remained in line operations either in the patrol or investigation divisions all those years as a street cop and case-working detective.

Before the Army, Hock worked armed security, performing various duties such as armored car, “working the door” of country western bars, and the general, security “watch”  jobs. In terms of military security, he was also required to work “force protection” stints in the north of South Korea. Security work continued – upon retiring in the late 90s from police work, Hock did a 4 year stint as a private investigator, working civil and criminal cases for people and lawyers, civilian “problem-solving” and numerous bodyguard/protection jobs. Of note, assisting the US Secret Service with Presidents Bush Sr. and Jimmy Carter, and organizing protection for NYC Mayor Rudy Giuliani tour, to name a few.

Upon police retirement, Hock performed numerous protection and security jobs for authors like Tom Clancy, TV personalities like John Walsh, politicians like “America’s Mayor” Rudy Guilliani and supporting the Secret Service with Jimmy Carter, just about anyone with a new book or music record, like Green Day, models like Cindy Crawford, when passing through north Texas, via PR firms, knew to use Hock to organize the safety and security of their trips. 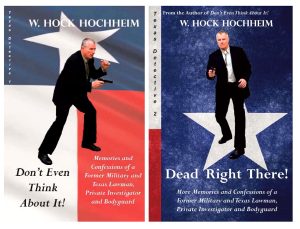 Read about the popular police and military stories in the “memoirs and confessions of a former military and Texas Lawman, private Investigator and bodyguard” in the Texas Detective Series. Book 1 is Don’t Even Think About it. Book 2 is Dead Right There.

1972 to Present. In 1973, Hock started his study in Ed Parker Kenpo Karate. Since that time he has amassed black belts in Filipino Martial Arts, Kempo, Kajukenbo and Aiki-Jutsu. He was voted (by readers) into the Black Belt Magazine Hall of Fame in 2001. He currently teaches hand, stick, knife and gun combatives in some 40 seminars a year in 12 allied countries. In 1990s, Hock was a modern pioneer in the integration of hand, stick, knife and gun training, and the use of the term “combatives” which was used by so few back then, but now an over-popular and widespread title today. (as a result, Hock is slowly trying to drop the term.)