In this age of widespread interest in de-escalation and verbal skills to defuse any and all encounters, this is a tale about how convoluted and difficult a quick, on-the-spot verbal solution might be. It’s a short story from a case I worked on.

A driver pulled his truck up into a handicapped parking space to drop his wife off at a post office. He did not put his truck into “park.” She got out and walked away. He reached down, did something for a second, and was about to back out of the spot, when a man walked by the front of his truck, scowling and yelling at him, waving a hand in the air.

The driver rolled down the window and said, “What?”

The man yelled in outrage about the driver parking in a handicapped spot. The driver, aghast at the outrage said, “I am not parked. I am leaving. I just dropped someone off!”

The man started cursing and closing in. “I had to park over there,” and he pointed down the lot. “You can’t park here!”
“I’m not parked here!” he said again. But then he now was, as the driver put his truck into the parking gear and got out, telling me later he thought that the man would come over and kick in and dent his truck, or reach into the open window after him.

The driver got between the man and his truck and said, “WHAT is your problem?” (oh, what a classic line! The classic answer is – “you’re my problem” and so on and so on. The very common low-brow script of a fight). And so it goes. You know the dialogue of this bad movie from this point on. You already know it. I often tell you that these pre-fights words are like movie scripts and usually quite predictable.

The complainer swings at the driver. The driver fights back. There are witnesses. The police are called and the man gets arrested for assault. Later this complainer files an assault case back on the driver and it becomes a “he-said, he-said” deal. 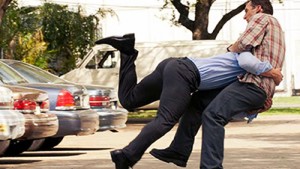 My sad part of the story is that one morning in a detective squad meeting, I got both cases dropped on my desk. My CID  Lieutenant says, “this ain’t going away.” Meaning these two guys are calling us and complaining about each other and how each were in the right. And of course, one of the two had even called the chief. Another day in Detective Heaven.

I started with this angry man, the complainer. I asked him to come in and give us a written statement, which he jumped at the chance to vent. He showed up for the appointment, loaded for vocal bear, and in a small, interview office I let him unload. The guy was panting when the oratory was over. I did not say a word.

“Okay,” says I. “let’s get that whole story down on paper.” I had to read him his rights and now the story was officially counted. And line by line, we got it all down as I typed his words as he said them. He calmed down and his remarks took a turn to another topic. The real cause and motivation of his complaining. Handicapped people and handicapped parking…

I did not answer. Then I said,” you want me to mention your parking spot concerns in the statement?”
“Hell yeah! Maybe someone will read it for a change?”

This theme rolled on. I realized that the guy wasn’t mad at the driver because the driver had pulled into the handicapped slot for a second. He wasn’t protecting the rights of the handicapped. This guy was mad at handicapped people! And how many parking places they got. He was ripping mad because of proliferation of handicapped parking! It would really be difficult, it is really difficult to de-escalate such an encounter without…ESP.

It’s always wise to explore de-escalation. Sure. But, there are a lot of people “out there” teaching de-escalation. In my opinion, most of them (and I know many of them) are very logical, very nice people but have never really stood before face-to-face rage. Real rage and its bizarre twists. Seen its ugly face. Or stood before someone who fights every Friday night, who just wants to fight for fight’s sake, and its Friday night, 11:30 p.m.!

Words can fail us. Words fail me…