Respect the Head Shot? Do you? Really? One of the conundrums in FMA stick sparring is figuring out the realistic importance of the head shot and emphasizing it in a training doctrine. Ignoring the strike (as in “pretending” it didn’t happen and “sparring-on”) because you have a helmet on is training doctrine mistake. Making it “count” in a helmeted world is important and should be a mandatory training doctrine mission.
Quick example. My friend Raoul is power lifter. A brute. In the 1990s, he so wanted to attend one of these stick fight events because…well…just because. He was also an agile guy and total, FMA “nut.” So, he did travel and attend one. The rules? Rattan sticks (Big Raoul has quite a war club). Fencing helmet. Hand gloves. You could wear elbow and knee pads. It’s a world were serious injuries abound and most people over 40-ish have to quit doing it.
Raoul’s fight begins. And within 20 seconds he bashed the other guy in the head so hard…so hard it ‘crinkles-caves-in’ the helmet a bit at the forehead area and the receiver is stunned. The ref stops the fight and asks if the guy is okay. He says yes. The fight continues and in a short time, the fight ends the typical wrestling match on the grass, which is so typical because with gear, rules and CRIMINAL and CIVIL LAW, you really can’t maim-kill off the opponent, no matter how rough-tough the fights are advertised to be. True reality is always gone. Raoul is choked! That is to say, he has to tap out. Losing, he was pissed. They peeled the helmet off the other guy and his face was bloody from the crosshatch pattern of the mask down the left side of his face. Blood.
Raoul shouts: “Who won this fight! I did in first 20 seconds with that head shot!”
Of course he had, but the rules….the rules! These rules affect training doctrine, whether the individual fighters, the instructor or the entire system-art realizes it. It became obvious to me in the 90s that if you train with gear, many people, most people probably, sort of ignore or misread the head shot as if it is any other body shot (they’re all bad), especially when helmeted. The sparring just goes on and on. I do not wish to name names and systems but I studied with a big, organized outfit that routinely stick sparred at the end of every class, No gear, but with rattan. Just for about a minute or two. Light sparring, NO head shots. Over time, this removes the head-shot-methodology from your “muscle memory.”
International competitor, Arnisador Teresa Cronin adds, “Well said Hock. I’ve seen a man get his head split open from a shot to the top of a WECAF helmet, blood pouring down, but the sparring continued like nothing happened. I also noticed in my own sparring I would sacrifice my head, because it didn’t hurt, to close the range.”
And get this – I recall a crazy competitor who tried to develop – follow me now – a way to crash his metal helmet into a stick head shot, so has to cause a painful vibration in the hand of the striker, essentially head butting the stick strike. Dreaming of a disarm?
All this eventually, subliminally de-values the head shot and distorts its importance in a “real” stick fight.
A “real” stick fight? What’s that anyway? Well, it is unlikely that most people will be in an actual life-or-death, stick-vs-stick duel-fight. If so, the head shot is still VITAL. It is instead, more likely in crime and war, that you will use a stick-like object vs. unarmed, vs. knife or vs. some gun threat. Needless to say, the head shot is still VITAL.
The challenge is to create a sparring system and competitions that values and embeds important strikes like the head shot. I organized it all out with the “Killshot” stick fight system since the 90s. If a fighter got clubbed in the head? Bubba, it’s over! The stick arm gets significantly hit? Whistle! “Switch hands!” And so on. But then you are sort of managing a tournament (point-style?) style fight, which of course, also sucks. I know, I ran these Killshots for years.
“I got him! No you didn’t!” 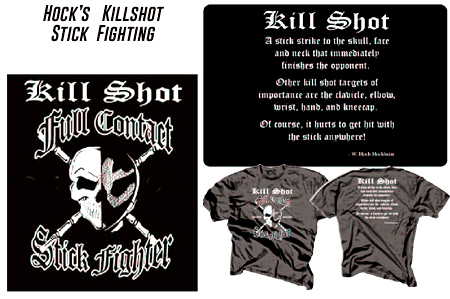 But in training and the organized fights we ran in the USA, Germany and England, a clear club to the head means the receiver officially LOST and “sits down, sits out.” In training, take a break for a second, reward and recognize what just happened and discuss went right or wrong. You have to think of ways to memorialize proper performance like head shots, even with small, training tricks.
“You sit down. You let your head get smashed.”
Or,
“Stop! Hey, you did good. You got that head shot in. Continue.”
The head striker is rewarded for getting the head shot. This builds the training structure to recognize and respect the head shot. With this sort of structure, fighters begin to develop head strike strategies and conversely head protection strategies, as a priority.
Remy Presas would frequently when teaching, stop and turn to us and say-remind, “Of course, you could just hit de man in de head with a stick! But, I want you to learn the art.” I found this admission, oddly perplexing, but he wanted to remind us…the difference. It made me think about what I was and was not doing.
(For the record, I don’t run these competitions anymore as they were a pain in the neck to do, and I haven’t made-sold these Killshot shirts shown above for decades. But when occasionally teaching FMA these days, I do cover these head-hunting, stick methods. I am 70 years old. If I sneeze too hard? I might wake up in traction, so I do not stick spar any more either, other than a few seconds to demo something. I can’t beat my gardener up anymore. But I can teach you how to beat up my gardener.)
Hock’s email is HockHochheim@ForceNecessary.com
Check out Hock’s new Youtube TV channel, with free full one our training films to watch. Click here 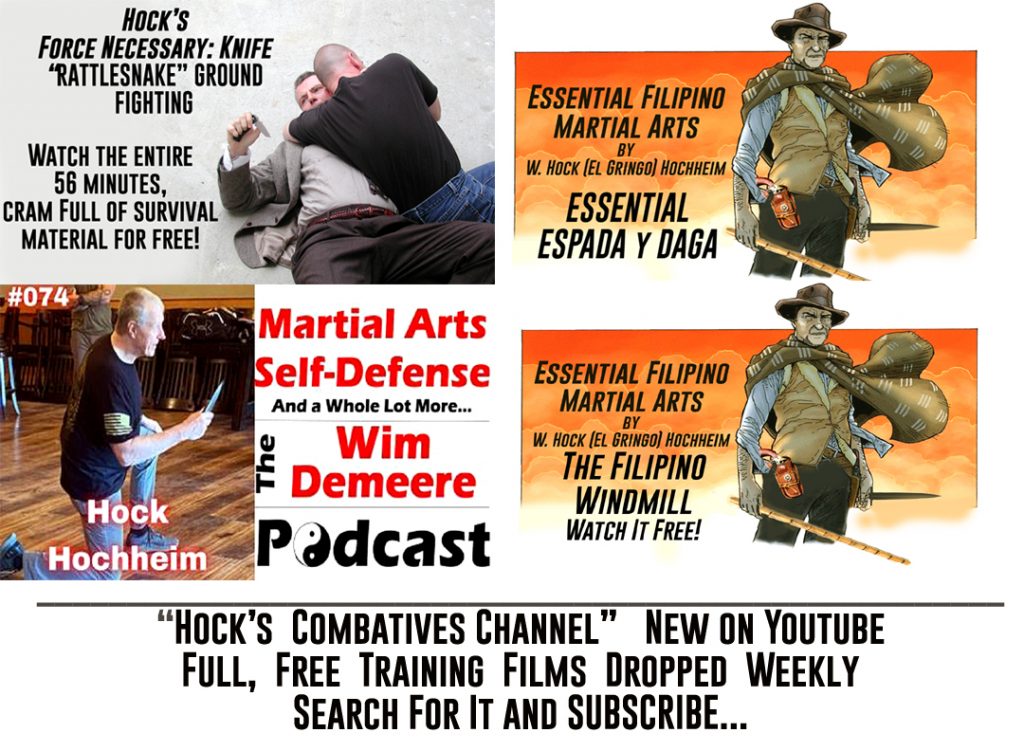