WHAT ARE YOU WEARING?

(If you are happy camper doing classic martial arts in classic uniforms? Gis. Barefoot? You are just drawn to the idea? Then ignore me. What do you care what I think? This is just a personal rant.) 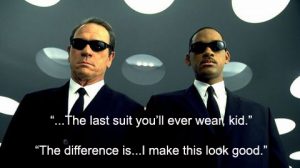 I was invited by some folks to a big reunion in the Philippines the other day, and I had to gracefully back out again. Because…because I just don’t go to such things. I am kind of a puzzle piece that doesn’t fit well in most places. When they asked why, one of my rambling answers was, “…yeah and you know,” this…that…“and I would have to wear a uniform, and…”

Wearing the martial arts uniform. How many times have I dodged events through the years partially because I might be, I would be expected to wear a uniform? Thinking about it, I have not worn a gi of any system in probably in some 20 or so  years. Wow. I don’t have THAT uniform anymore. Nor any uniform. No black belts shoved in a corner. There are all long gone. I don’t recall throwing them away, but they are simply gone from my closets. And I’ve had many a gi since 1972. Kenpo. Karate. Kempo. Jujitsu (old school, not just wrestling). Aiki-Jitsu. Modern Arnis. Arnis de Mano. Not counting Thai shorts. All…gone.

I did show up, non-uniform, at a few events many years ago. One time in the 90s, I taught at a big event in San Francisco alongside Wally Jay and Uncle Bill de Thouars. There was about 300 people there.  ALL in gis except me and Dean Goldade. We wore t-shirts, blue jeans and shoes. We really stuck out like sore thumbs. Like disrespectful bums. I hear now that t-shirts and gi pants or sweat pants are acceptable in some big events and gatherings. Which may get me back in circulation? My Kuhl pants might work?

Being a “60’s, redneck-hippy,” I kind of rebel against uniforms. I had to wear an Army uniform and a police uniform. And I was detective for a long time, and had to wear a suit and tie for many years, and that is kind of a uniform in a way, but a step aside a regular uniform. On special assignments we wore only the smartest, tactical of clothing for what we were doing. The ultimate goal, I think. Which is getting to my point about playing dress up…

But I am a little twisted. Decades ago, I didn’t get into the martial arts to be a “martial artist.” I just wanted to learn all the …you know…the secrets…of fighting. And, through those decades, where else could you go to learn such things? I started in Parker Kenpo in 1972 and the classes were draped and adorned in classic uniforms. I mindlessly accepted this policy as an annoyance. Terrible, huh? Then, in police training in 1973, I noticed that when attending the – what has become defensive tactics – classes, police showed up in sweat pants, athletic shoes, t-shirt and usually brought along their pistol belts.  At least they wore shoes for God’s sake. At least they brought their belts, but many times they did not wear the belts unless the training switched to gun-related stuff. And what’s with the sweat pants? The clothing question remained for me since 1972.  Why are we not training in the clothes that we will probably be fighting in?

I’ve always analyzed stuff through the “who, what, where, when, how and why” questions?

WHAT ARE YOU WEARING? (and why?)

In my classes, in my school I operated years ago in north Texas, there were no uniform requirements. People could wear whatever they wanted. Several of my students were cops and they would show up for class in their actual uniforms, which I encouraged. I know this is not good for school sales and the school-money-systems set up by the franchise programs today. I sold and still sell t-shirts, but they are not required. I understand the requirement though. The whole group-thing, and the martial uniform is supposed to create all kinds of group psychological “unity,” – yeah – I know, but I didn’t care about all that sales structure stuff. I mean we are not preparing a military unit where such group/unit psychologies really shine. 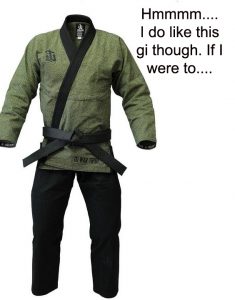 Through the years I have seen all kinds of “fashions.” Some random notes on the fashion subject… 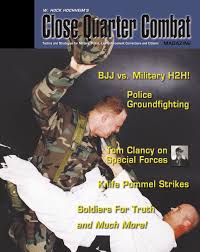 In seminars, I ask attendees to wear street clothes and shoes. We need pockets and belts. Even if they wear “street short pants” they still have pockets and a belt. A shirt over your gun is important, as is a holster. Don’t just show up with a rubber gun and no holster (and belt.) If you have a fixed-blade training knife, you need a sheath to draw it from, else you probably would not have a fixed blade knife with you, walking around the farm or downtown. (This is a BIG disconnect in training schools. A zillion, rubber, fixed-blade knives and no sheaths.)

And, no need to overdress in my seminars as though one is being dropped into Cambodia for two weeks (unless, of course, you are actually being dropped into Cambodia for two weeks). I always wear mat shoes, as I hope every attendee will too, because we often don’t know where I will be teaching and if there is a “no-shoes-mat-rule? We respect that. I, at least will then wear socks because I must hide my horrible Amazonian Jungle, Toe Fungus. Believe me I know CDC is happy that I am not passing this strain around on your mats, around the world. (I know of a system that actually sells socks with their logo on it.) 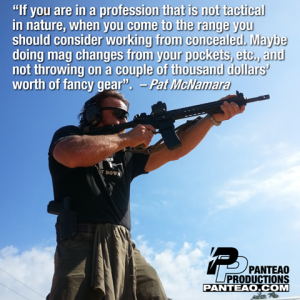 As a so-called, “self defense instructor,” or whatever it is exactly that I am, I have made a rule for myself I always hope I can remember and consider when drawing up outlines, books and teaching – “reduce the abstract.” This is not easy challenge, given the circumstances of your school or your training grounds.  I have fallen short of this self-imposed standard many times, but I try.  But please consider the phrase, reduce the abstract. And one way of reduction, is to dress right for the who, what, where, when, how and why of your perceived fight. Now, we cannot create 10 or 12 movie sets with a group of improv actors to make everything seem ever-so-real to a student, but we can at least… at very least… dress appropriately. 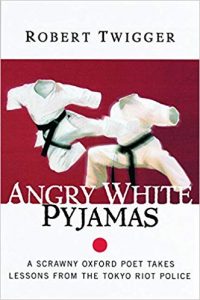 You don’t find tennis players in practice wearing baseball uniforms. Baseball players are not practicing in football uniforms. Army soldiers do not practice in scuba suits. Know your goal, your mission and dress accordingly. I know people love to belong, love immersing themselves into groups. They love clubs. Tribes. Teams. And showing their pride. This usually means outfits and outfitting the outfits. I get it! I really do. Again, If you are happy camper doing classic martial arts barefoot, in classic uniforms? You are just drawn to the idea? And you understand the questions I am asking? Then ignore me. Ignore this. This is just a personal rant. Who cares what I think anyway? Doing any of the aforementioned things is better than sitting on the couch. I only ask that you at least kick around this idea, understand it and can articulate your opinion on these types of fashion choices.