A death grip is officially defined as an extremely tight grip, First you have to grab. One of my training structures is the Stop 6 program –  the 6 common stopping points-collisions of  a typical fight (or arrest). Stop 2 covers the hand, stick, knife, gun grabs on fingers, hands, wrists, and weapons. And importantly, their counters-escapes. 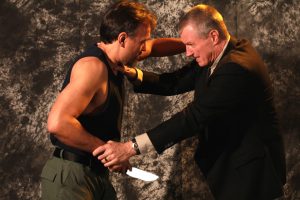 The grab is made of two components in Stop 2. The Death Grip is really about two parts :

In all of the Stops, 2 through 6, a+- catch and grip is not a catch or grip without your thumb. Your life depends on this, especially with a knife and pistol, all defined in the Stop 6 program.

All martial and even various sports training requires much catching skills and hand gripping strength as you can muster and exercises that directly or indirectly increase such are vital. Almost all people immediately get this idea.

“If your grips fail, all your technique goes out of the window. It becomes hard to execute anything.” – BJJ Coach Lawrence Griffith

All people get this? Well, not all. Decades ago, various, yet small group of famous martial artists would suggest not using your thumb in a capture of an opponent’s limb. I stood in numerous seminars in the 1980s and 1990s hearing some martial instructors say this. Their small point usually being that your thumb or hand could be caught in some kind of lock and you would be supporting that capture with your full grip. As one famous JKD guy use to say,

“Rule of thumb? Don’t use your thumb.”

Huh? At first I mindlessly accepted that. But when I gave it a mere second thought? No. The bigger point? Minutes later when trying to stop and grip a stick or knife attack, I watched these same instructors all unconsciously demonstrate full hand grabs the wrist or forearm. They fully grabbed limbs (and clothes) 99% of the time.

I would see in seminars, mine and others, an unchallenged, playful catch or stop with just a curved hand, with the thumb beside the fingers…among friends. NO! Now, this no-thumb-helping move stops almost nothing and an attacker can move but an inch and instantly swoop under the curved hand to hit, stab or shoot. The thumb grip stopped this.

Today, once in a while, I still hear this advice echoed around the world. They are down-line lineage from these people and it takes a little “slap to the brain” to shake them out of it. Not using your thumb to grab is a thinking disorder mistake.  When doing throws and takedowns you use your full grip. In ground fighting you use your full grip.

And through the years I have run across self defense instructors who proclaim that fights never start with arm/wrist grabs. These short-sighted people have a tendency to view fights as bar fights, I think and are not schooled in the world of crime. They make fun of old school jujitsu and other systems that tend to start their programs with escapes from “common” grabs. BUT! CRIMES on the other hand, (no pun intended) like kidnappings, rapes, robberies, home invasions, assaults to murder entails such grabs. Victims are grabbed, pulled and pushed around. Tied up and taped. Handcuffed. And grabbing motions are also like weapon draw and drawn weapon interruptions. 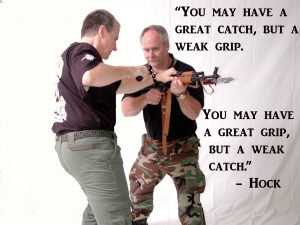 Back in Training Mission One  and in all the courses, I list the four ways a human limb attacks you, hand, stick or knife…

It will always be hard to catch a thrust or hook, sure, but all kinds of untrained and trained people do in crimes and fights. But more importantly, look at the last two. The hit and retract and committed lunge. The hit and retract is a natural counter to a grab as it snaps back, and very difficult to seize. We have drills for that. While at times the committed lunge is caught and then driven foolishly into  your catch-grip, actually helping your catch-grip.

Some notes on the Catch and Subsequent Grip 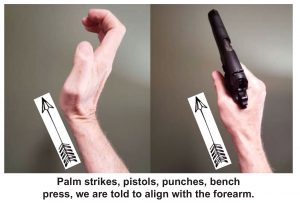 It is a good idea to practice for that sort of alignment with a catch, to save your thumb from hyper-extensions and worse. Other steps like this are accomplished in sports and you can can develop this movement too. We have drills for this. 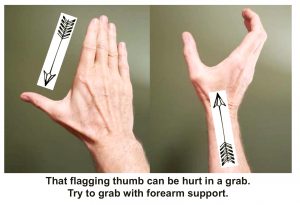 Further in, as in Stops 3 through 6, there are arm wrap catches (even leg catches, but this is about Stop 2 problems, just a bit further out than 3, 4, 5 and 6. In Stop 2 segments we cover the hand, the stick, the knife and the gun, catch and grab. And their counters-escapes!

Need we list all the exercises for grip strength here in this short essay? I hope not because so many exercises develop it.  Just search around. Oh and rule of thumb? Use your thumb. Wisely. 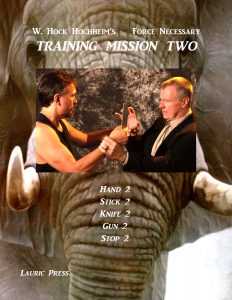