For 26 years now, a motto for my Force Necessary: Knife combatives course is, “Use your knife to save a life!” Desperate times and situations. Mine is an origin, politically correct slogan that sets the stage for the carry-and-use doctrine. 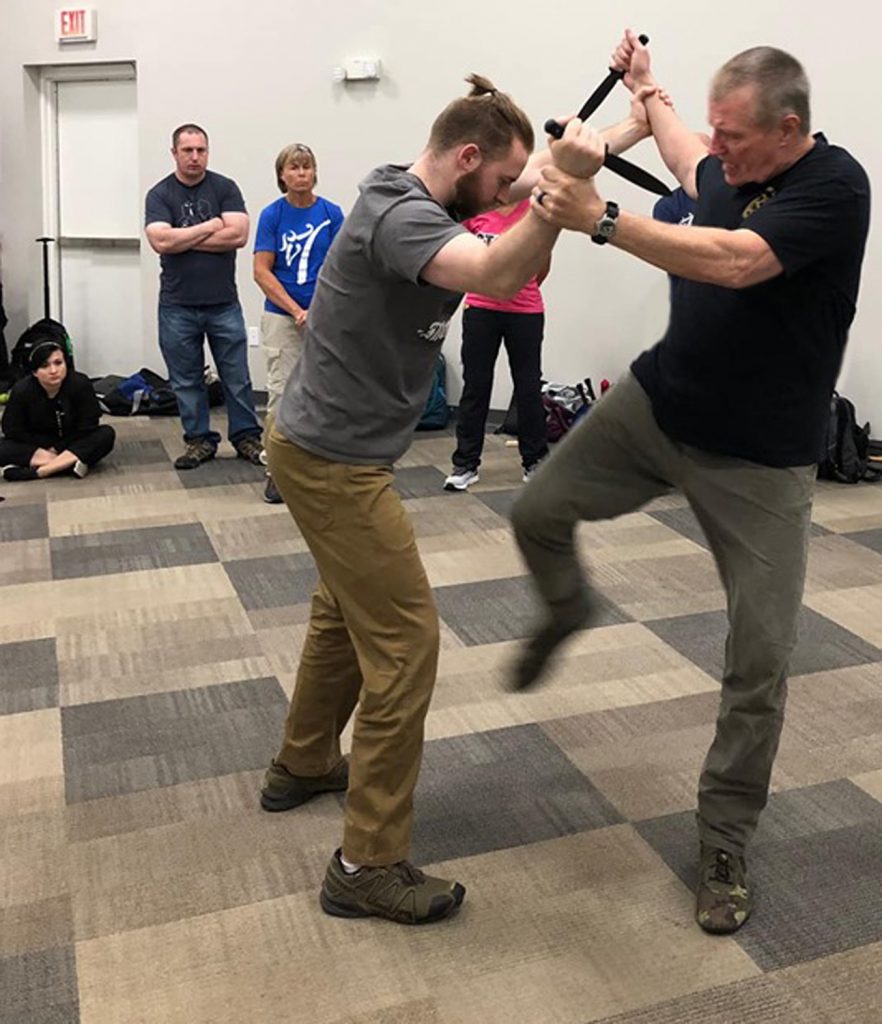 The knife can be used for work, for less-than-lethal purposes and lethal purposes. Yes, less-than-lethal despite its reputation. Still, the edged weapon is not well regarded-received in the legal systems of the civilized world. I must warn you that if you use one to defend yourself in “perfect self defense,” you usually will be harshly regarded and somewhat crucified.

Just carrying a knife can be a problem in many places. Most pocket and belt carry knives are illegal in many countries and in some cities and states in the United States. Often you might have a very common sense reason to carry, such as your job.

If you run across the street from your factory to grab a cup of coffee, or travel to and from work, you may be grilled by authorities about your pocket knife. If you use a knife in self defense, there will be legal “background questions as in who-knife, what-knife, where-knife, when-knife, how-knife and why-knife?

These are some of the legal questions authorities will consider, investigate and ask about your knife-carry in these knife-restricted areas or if you use a knife in a fight. The prosecutors and defense lawyers will want to know these answers.

Despite the carry laws, knives are quite ubiquitous. There are in the kitchens, houses, restaurants, indoor and outdoor worksites  in the world. There was a stabbing the other day in a Texas Walmart. A man yanked a for-sale knife off a shelf and stabbed someone. These facts of availability render some of the naysayer quotes above moot.

And I might address the “There are no self defense knife use statistics where I live. Why bother then?” comment. I usually hear it from people/instructors/school owners who live in countries where knife-carry is nearly or fully illegal. They say there are consistent numbers of knife and gun crime by criminals but not knife self defense use. Could that be that knives are just not allowed on the streets for the normal law abiding citizen? It’s no wonder no one can defend themselves with a knife.

Still, despite the stigma, I carry on with my own knife course – Force Necessary: Knife. Here’s why and perhaps some of the talking points I use, maybe you can use for your arguments. The following is how and why I justify a “nasty, violent” knife course. 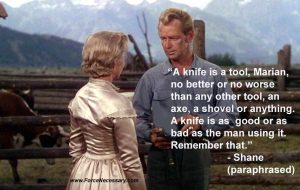 First off, I understand your anti-knife concerns. I really do. I have wrangled with these issues. I have no particular fascination with knives themselves. I feel the same way about guns and sticks. I do not collect them, in the same way I wouldn’t collect wrenches or hammers, or all tools in general. These things to me are tools. Some folks do collect knives and of course that’s fine and fine hobby. But since I feel this way, this detachment, I might offer a very practical viewpoint on the subject, along with, needless to add, my decades of investigating knife crimes might add some value too.

Knife training should not just be about knife dueling, as so many ignorantly only work on that. It is:

A person (who lives anywhere) should know how to use a stick, a knife or a gun, despite the laws possessing them. I am not talking about legal or illegal possessing here, as in walking around with an illegal weapon in your pocket. I am just talking about use. Using it. Knowing. Messing with it. Familiarization.

The big picture.
Martial instructors with statistics of things that almost never happening? A whole lot of things hardly ever happen in some areas, anyway. There are 330 million people in the United States. Millions in other countries. And the odds of being a victim of any hand, stick, knife or gun crime is quite small in comparison.

Stats also that say that knife defense hardly ever happens too? That beatings with impact weapons hardly “never happen.” That fistfights and unarmed beatings hardly ever happen. I agree in the big picture. I think you would discover though that even simple, unarmed fights are also extremely rare when compared to population size and the billions of personal interactions people have every day.

So then, if an actual, unarmed fight, or an actual unarmed attack/crime is so very, very rare in comparison to the population number, the interactions numbers, why do we then bother to practice any self-defense at all? If hardly anything happens? Why bother with your Krav Maga? Your combatives? Your martial arts? However, annually, consistently, people use sticks, knives, pistols and long guns in crime and wars. The problem exists. Since it exists, the problem requires solutions. It requires a repository of information and training about them. Not ignore them.

Still we work on these problems because on some level we know, it has happened, will happen and could happen to you and yours. It sort of – needs to be done.

A study of the FBI crime records disclosed that through the years, 40% to 90% of the people the police must fight, are armed in some fashion. That’s a lot of weapons out there in the civilian world. But, of course, in the history of crime and war, a knife (and sharp, knife-like things) countless times in combat.

Since this “no-knife-ever-no-matter-what” essay aired on social media back in 2016, Brits, Europeans and Australians have presented examples when desperate people have used knives to save lives and have actually been acquitted, even within their insanely, strict laws. Even guns have been used in self defense and shooters were acquitted in “no-gun’ worlds. In the end, the “totality of circumstances” (a legal term) and common sense should usually win out. We hope! Should you ever, even dare to use a knife to save your life? It will certainly be ugly. There will be ramifications.

Never have a knife? And I would be remiss not to comment here on the subject listed above on “lost,” dropped or disarmed knives in this essay. You might not have a knife, but he does! And in your unarmed combatives class, your Krav Maga class in “no-knife” countries, you still practice knife disarms ad nauseam. You break the guy’s nose and execute Disarm #22. It worked! Two things happen to the knife –

What happens next? One naysayer says he will just “throw that knife away” and continue to fight on unarmed versus one, (or two or more) bad men. And just because the knife (or gun) is on the floor doesn’t mean the bad guy can’t lunge down in a second’s flash and get it back. The lethal threat is not over because the knife has hit the floor at your feet. It’s still within lunge and reach and his deadly intent has been established with his assault.

Knives! Look…hey…they exist. They are everywhere. To save your life and the lives of others, use them when and where you got them. If you call yourself a self defense, combatives, survivalist, you must have a working knowledge of hand, stick, knife, gun world.

Warning though, get ready! if you use a knife, even legally, you will still be rung through the legal ringer.  First the knife carry-and-use stigma. Then your background, your comments on social media, your “unusual” (they will call it) interest in weapons. Your knife brand name and your knife social group. Your tattoos. Your infatuation with skulls and other imagery. Everything will be used against you.  And you will spend a lot of money with lawyers. I have written about these obstacles extensively. Violence sucks and this will suck too.

So, despite all the legal negativity, and stigma, I still maintain the Force Necessary: Knife course as a storehouse of information and research on the subject. Somebody has to do it.  Knife versus hand. Knife versus stick. Knife versus knife. Knife versus gun threats. Standing on down to floor/ground. Legal issues. Use of Force. Rules of engagement. Psychology. History. (Certainly not just knife dueling.)

I will leave you “never-ever-knife” folks with this thought. This question. It’s 4 am and you hear two thugs breaking into your back door. Your spouse and kids are asleep. Presuming you are unfortunate enough, deprived enough, not to have a gun handy, do you reach for the biggest kitchen knife you can get your hands on? Or, will they get to your big knife first instead, as so many home invaders and rapists like to use your kitchen knives, so they aren’t caught with a knife in to or fro transit. If you don’t even think about getting a kitchen knife in that very dark moment? You are a very poorly trained, self defense, survivalist. If you do realize you need to get the biggest knife you can find? You may have just joined that crazy knife cult you so quickly dismiss!

Check out all our Knife books and downloads. 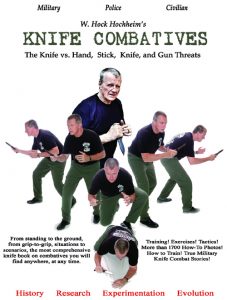