With advancing age and advanced age, one’s reliance on “kuraty” wanes. Someday I know I will be limping around with only my snub-nose, hammerless revolver in my jacket pocket as my only and last resort, despite all the years of training. And what of those who’ve never done any “kuraty?” These inevitabilities make one think about handy support, self defense weapons. Like the small handgun and one might be…the mysterious, intriguing…blackjack. 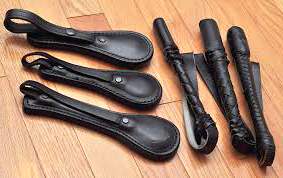 Andre Wong of Police One defines: “The sap, slapper, or blackjack is a heavy leather pouch, eight to twelve inches long, filled with lead and sometimes a flexible steel rod. Unlike a baton, a sap’s size and shape allowed it to be concealed inside an officer’s pocket. Saps may not look as intimidating as a gun or a baton, but thinking they’re not dangerous would be a mi stake. A sap is dense enough to break bones when the user has room to swing, and the leather edge is rough enough to cause a dull, ripping laceration to the face when used as a jabbing instrument. Slappers would be ideal for use in ultra-tight quarters like a fight on the ground against a large suspect.”

I noticed a number of folks selling and teaching these tools of late. And numerous training videos. I see a lot of artistic, photo displays of weapons on Instagram, and most include saps laid amongst knives and pistols, etc. Given the laws of most states in the USA and countries around the world, I am not too sure you want to be “caught” carrying one, or using one. I am not too sure many of these teachers, photographers or makers have ever used a blackjack in a fight? Not that, that is a mandatory rule. Smart people can invent and teach smart things. Or, have they considered the vast legal ramifications of wearing and using a blackjack? 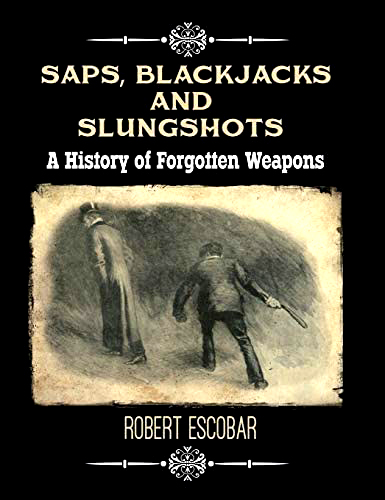 The law? Here’s just one example, from the People’s Republic of California and the many states that swap legal weapons lingo: California Penal Code 22210 PC makes it a crime to manufacture, import, sell, give, or possess leaded canes or batons (or other weapons in this category). The offense can be charged as a misdemeanor or felony. A conviction is punishable by up to 3 years in jail or prison. A leaded cane is a: crutch, staff, stick, or rod (later defined as any blackjack) that is weighted with lead so it can be used as a weapon. The statute also applies to short and weighted objects that can strike a person.”

Okay! Then, well, so much for California. You heard it’s illegal, but it sort of “brings it on home,” when you read the actual laws. I fail to see the word illegally “teaching” in there, though. Exponents, fans and sellers say that in most states you can own one (at home), but warn not to carry one or use one. ETSY sells them as “novelty paperweights.” Others advertise them as “change purses with stout handles,” with coinage inserted via a zipper on the striking end for weight. This fools no one.

Police carry. I was officially issued and carried one in Texas policing for many years in the 1970s and mid-1980s, though I rarely hit anyone with it as I was trained and training in empty hand systems so much, I used that first and foremost whenever I could. I noticed that others less trained, whacked the crap out of people with them. I have seen people stunned and knocked out by them, and upraised fists smacked by them – instant, significant reaction. In the U.S. Army Military Police and in Texas we were also issued batons, which again, I didn’t actually use much, though rules were pretty “stick-free-wheeling” in the MPs. (We were even taught to quick-search a body with a stick, rubbing it all around the potential weapon-carry spots, which now…would probably be considered rape of some sort.) 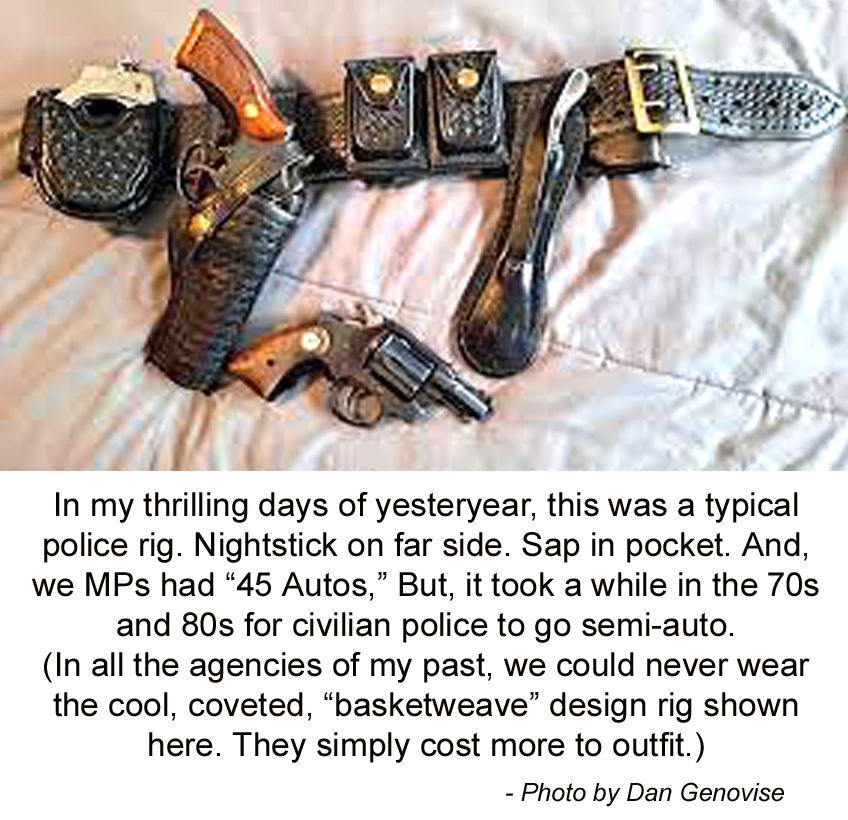 Where did we tote that thing? Believe it or not, in the golden, olden days, usually in our back uniform pocket! Able to be easily yanked out by any miscreant! In my small world I’ve never seen that happen, although stats tell us that lots of resisting people did and do like to grab our stuff and it has probably happened. I have had some attempted gun grabs (one on the ground) and handcuff grabs. Some uniforms had sewed-in sap pockets on the thighs. I hear that some uniform companies still add these “sap pants pockets” (costs more) as a matter of routine…but remain empty.

Empty? Many police agencies, mine included, decided one day in the 1980s to collect up all the blackjacks and hide them away in dusty closets. Night sticks also slowly de-evolved into expandable batons, then for many agencies all “sticks” also completely disappeared (along with those BIG flashlights).

Blackjack Training Issues and Problems. I sometimes consider slipping a “Blackjack Module” into my Force Necessary: Stick course, because it is an impact weapon. I often consider too, changing the name of Force Necessary Stick, to Force Necessary: Impact Weapons. But, it doesn’t “sing” so well as the core, four single nouns, “hand, stick, knife, gun.” Imagine that added, elongated song title of nouns –

“Hand, Stick-Flashlight-Blackjack-Sap-DanBong, Knife, Gun.”  That makes for a long album cover name. Even adding the term “impact weapons” replacing the solo word “stick” rambles on, “Hand, ‘Impact Weapons’ (instead of just ‘Stick’), Knife, Gun” is still too long for me. It is hard to replace the simple, message “impact” (yes, pun intended) of single-syllable caveman, “Hand. Stick. Knife. Gun.”

With blackjacks I have other reservations other than just too many syllables and nouns in the title. Mostly those weapon laws, yes, and then “supply and demand” problems. First off, they are illegal to run around with almost everywhere to begin with, lest of all a box of them. But then so are samurai swords and that hasn’t stopped classes on them! Just don’t walk into a Walmart wearing a katana. People like to study all kinds of stuff from esoteric to practical.

If I taught the sap subject, I would need to travel worldwide with a supply of, a bunch of actual saps or training saps at seminars for attendees. 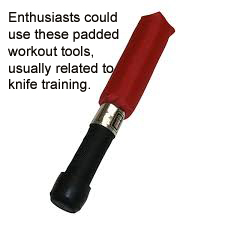 You see, no matter how much we ask, people do not show up with the subject gear. Local schools do not have a boxloads of saps in their closets either.

In my world I’d need like…25 or 30 of them. And do you now much stuff I already fly with? Boxes of stuff. Why so many? There’s not much worse than having a specific, weapon-topic seminar, or a session within a seminar, showing up and no one or almost no one has that specific training weapon. I could tell you stories. You are talking to a guy who’s been stopped in Australian airports because I had a box of wooden pistols. What safety, look-a-like, substitute could I fly and drive around with such a box of stuff, that would be blackjack-like and yet, not get me tossed in TSA or the local hoosegow for illegal weapons? Just one real one in my luggage or to and fro the seminar could be legal trouble.

Making the blackjack subject matter a mandatory part of the FN:Stick course, makes these support accommodations on me mandatory too.

The padded knife-dueling tool shown here is an option but it is not perfectly shaped, removing the nuances of the weapon. (This is also a knife problem when trying to emphasize the knife’s edge with a rounded replica.) And…no strap! You have to experience the scenarios with the straps-lanyards.

In the spirit of “reducing the abstract,” Nok – Tak Knife sells a soft cleaver knife, with flat top that might better substitute for a sap. About $40.  Again, no strap. And I am quite sure, someone reading this will supply a photo of replica training blackjack, with the quote like, “Dracula’s Obscurities sells foam saps for training!” And of course, more news that John Doe can make them in his garage. Great news for the sap training world. 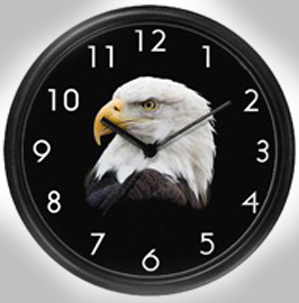 If I did teach this topic, I would not replicate the mediocre police blackjack material of yesteryear, but rather teach the subject through the basic and advanced “Combat Clock,” I’ve used for 27 years now. The basics? “Slash and stab” at 12, 3, 6, 9 or high, right, low, left. Advanced? All numbers of the clock, standing through ground. And then the nuances, the nuances of that particular weapon. One such nuance would be sap-targeting, another is if you turn the standard, flat top, blackjack sideways, it is more stout and less “giving.” Another is suddenly grappling with one strapped to your hand or wrist – one must experience the “judo” and “jujitsu” moves of the world with one strapped-wrapped to you. I might also add that a blackjack handle within your closed fist helps reinforce your hand a bit when punching. There’s more of course.

Fad or Fad Not? In the big picture, I suspect that the subject matter is a fad. I am not a passing-fad-boy. And, I don’t mindlessly replicate fads or fad makers. Fun, but a fad and at this point, I can’t see it as much of a big, crowd-drawer or a big, crowd-pleaser in the big picture of the so-called “civilized world” – in that the damn thing is illegal most everywhere. Of course, I could be wrong and blackjacks and saps might sweep the globe. And in a “free state,” if asked I guess I would cover the topic.

Despite the legal hassles, still the lore and the look of these little scrappy, tough bastards are intriguing enough to stay alive for “free staters,” collectors, gawkers, historians and self-defenders. 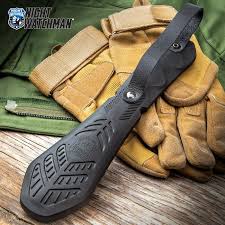 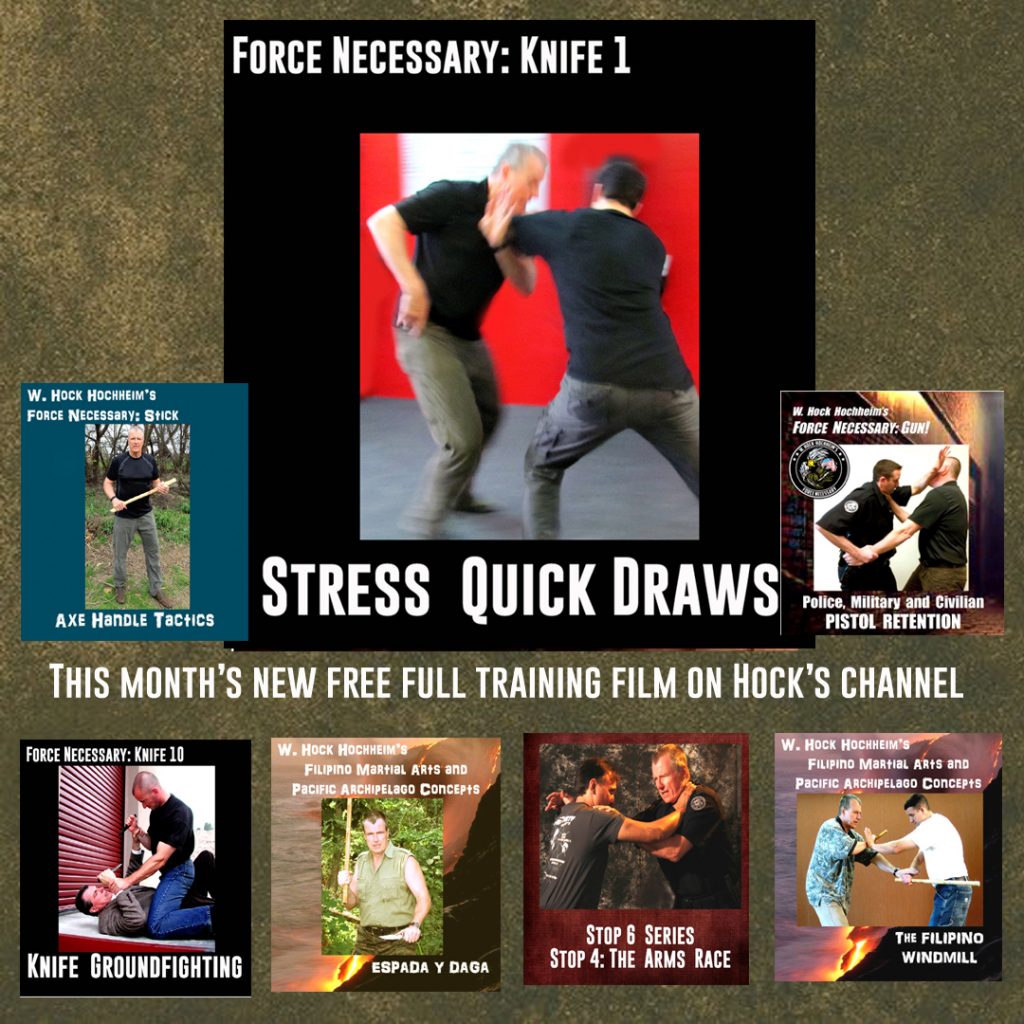