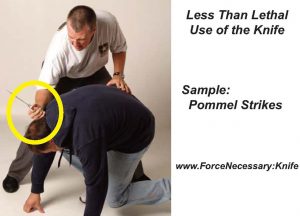 At times, missions, rules of engagement, the law, and use of force standards require the capture, containment and control, not the death of an enemy. This is once called by professionals as “non-lethal” measures, but military and law enforcement specialists recognize that the term “less-than-lethal” is a smarter, and a more comprehensive phrase than “non-lethal” – as various tactics and equipment designed not to kill and called non-lethal, might still actually kill despite the intent, design and name. This renders the term “non-lethal,” into an operational misnomer and confusing liability.

A comprehensive knife program also covers less-than lethal applications. This is important for the mission and legality. Your knife course must drop all the death cult, over-the-top, violent, macho imagery (unless you are a member of an elite military unit where such imagery is psychologically smart -which is NOT the majority of us). The knife is “just a tool,” as the old saying goes, but a tool with stigma. The following tactics are less-than-lethal and can be substituted for lethal movement.

We know that the knife strikes with:

Less than lethal applications of this are:

Less-Than-Lethal 1: Verbal Skills and the Art of Surrender 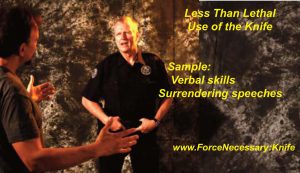 Your presence, your weapon presentation, your speech, your threats, your disarm, in the onset of a fight may cause the enemy to surrender. At times, getting in and getting the tip of your knife up against the enemy, along with a verbal threat, may coerce him to surrender. 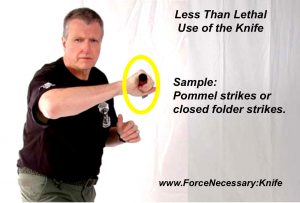 The pommel strikes, saber or reverse grips are other less-than-lethal strikes unless it cracks the skull. Or, your pommel has a “Klingon-spiked-end” which renders a whole range of pommel use, useless. 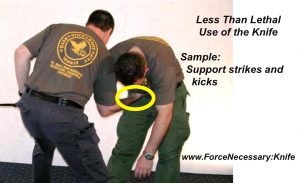 Striking and kicking the enemy are less-than-lethal moves.  The enemy has dropped his weapon and is theoretically an unarmed man and in many situations, both military and civilian cannot be killed. 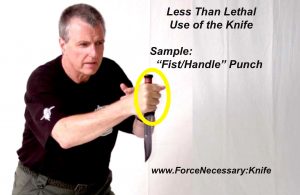 The practitioner can turn his knife grip into a punch with the flat of his fist, forgoing the stab or slash, with a saber or reverse grip. 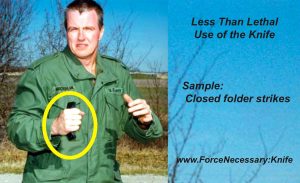 The practitioner may fail to open, or close his or her tactical folder and use the closed folder as a “palm stick,” impact weapon.” 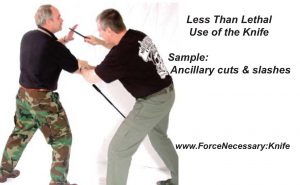 With a working knowledge of anatomy, a practitioner may slash various “secondary” targets like muscles and so forth that may cause an enemy to surrender or collapse, without a fatality.

Less-Than-Lethal 6: The flat of the blade strikes a stunning blow and grappling 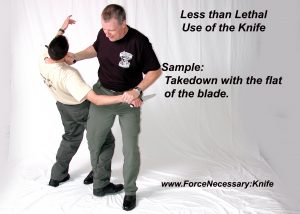 Many militaries teach the flat of the blade strike to the head of an enemy to stun and bewilder them, as a set-up for further action. When a less-than-lethal mission becomes mandatory this flat strike becomes an option for striking, as well as a considerable amount of pushing and pulling of grappling.

In Summary… Of course the use of the knife is always stigmatized trouble. It is a nasty weapon, but every one who dares “study” the knife for the military, for enforcement or self defense, one who engages in a knife system, should be aware of its full potential, and that includes the “who, what, when, where, how and why” to minimize its damage.

Get all of his Hock’s films and books here