The Whisper Tip of the Reverse Grip Knife 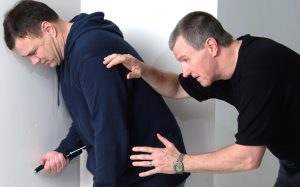 I’ve heard the whisper. Have you? The secret tip.

“If you see a guy hold a knife like this (reverse grip) watch out! He really knows what he is doing.”

Said the tipster who knows nothing, anyway. A receiver from another tipster who knew nothing. I have heard that “insider tip” numerous times. One time, I was even told this tip by a guy who had never been in the Marines, but heard this tip from a “Marine friend.” The irony was I was in Triangle, VA, hotel restaurant next to the Marine base Quantico, there teaching Marines among other things – “knife.” Some of it saber grip knife.

I have nothing against the reverse grip. I teach it too. But, how many times have you heard or been told, or been taught the reverse grip is the only grip to use? Because there are some popular courses out there preaching this idea. I am often both depressed and fascinated by the paths and ideas of various knife courses. Some appear to me like death cults, others have what seems to be oddball, incomplete conclusions.  Take for one example, the obsession with dueling. While dueling can happen, it is not the only thing that happens in a knife fight (ohhh, like ground fighting?)  Most never cover legal issues and just cut and stab away. Some way over-emphasize Sumbrada patterns. I could go on. Another is the various obsessions with knife grips.

In the 1980s, I was at a Dan Inosanto seminar and he said. “there is no one perfect knife grip, just the best one for the moment.”

Man! That little phrase stuck with me forever as a baseline. Sometimes I think I have short-changed myself as a teacher when I state my mission statement is total “hand, stick, knife, gun.” I think it subliminally shortchanges the 4 individual courses in the minds of practitioners. Courses of which I think are terrific, otherwise I would improve them or not teach them at all. I have slaved over these courses for decades to keep them simple and thorough. “Each course is stand-alone.” So, my stand-alone knife course seems to get buried inside this bigger mission – nomenclature.

I worry about knife grips too. With my Force Necessary: Knife course, I insist that a practitioner learn and experience BOTH the saber and reverse grips. Then after much COMPLETE study, they choose what their favorite grip is, based on the “who, what, where, when and how and why” of their lives. I never tell them to automatically favor any one grip. Pick one, but make it an EDUCATED choice (and not a whisper tip choice). I like both grips. But some don’t like or respect both grips and for odd and incomplete reasons.

The first time I received any training with a knife was in a Parker Kenpo class in about 1972 when they received Kenpo knives and dull trainers from Gil Hibben. The knife was designed to be held in a reverse grip and used in a kick boxing format. This initiation caused decades of Kenpo-ists to hold their knives in a reverse grip as though Moses, not Gil Hibbens, had handed them knives from the mountaintop. In the late 1990s I was teaching in a multi-instructor camp and a old Parker Kenpo black belt was there with his little group. I was covering saber grip material ( a pox! ) and he would horde his people over  into a corner and show them the “proper, reverse grip way” to fix what I was doing saber style. Which by the way his was more complicated and somewhat awkward than the simple saber material I was covering.

Finally he had to approach me and said, “you know, the reverse grip is the superior grip.”

He glared at me.

“You can do just as much or even more with a saber grip,” I added.

He stormed off – his 7th dan “master” self, all upset that someone younger in blue jeans and a polo shirt told him flat-out no. (oh, did I mention that he also makes and sells reverse-grip-only knives?) My next session by the way, I covered some reverse grip material, as I am…an equal opportunity stabber.

People pick grips for odd reasons too. I recently read from a guy writing about his grip choice. He said he once saw someone with a training knife, saber grip, stab a mitt and the guy’s hand slipped up on the blade. This made him pick the reverse grip. Really? That? Well, as a detective who has investigated knife crime for decades, I can tell you such slippage happens with BOTH saber AND reverse grips. It depends on the knife! It’s shape, handle texture and any guard/hilts, design, etc. Dear Reverser – your hand slips down on a reverse grip too. Jeez. In fact, a hammering reverse grip deals a mighty blow and your hand needs to be protected perhaps even more, versus an ice pick grip slip.

“well, the reverse grip is the Filipino way.”

“Ex-super-copper Pete Smith says the reverse grip is the best.”

And I will go you one more reverse grip oddity that’s worse. There is a sub-culture out there that wants you to fight reverse grip, with a single edge knife, with the one sharp side, “inside,” facing back at your body. Not edge out to the outside world, where the enemy bodies are attacking you, but edge back at you. Dull edge at the enemy. This is its own unique thinking disorder. The world you are fighting is OUT there, not in your armpit. And why must you hook and haul ALL your enemies, ALL the time inside and close to you? Can you? Can you hook ALL people, ALL the time, in for your one- trick, special magic?

You should have a double-edged knife, which is legal in some places, or you should have a knife with one complete sharp edge and the other side/edge   1/4,  ½ or ¾ sharp anyway. (the so-called “false edge,” a confusing term for “civilians.”) Then the edge-in-only argument becomes moot, because you can still slash and stab, and stab and slash the outside world. But to purposely plan and buy and limit yourself to one edge, then limit yourself with that edge-in only, is…is…just a thinking disorder. It’s a dangerous, thoughtless, thinking disorder. People even make up these excuses…

“Well this type of knife is meant for…”

“I like this type of knife because when the guy is here, I can….

The guy is…here? How’d he get there? Dude, your “meant for” list is too small when you consider all the possibilities you might face. So then, are you going to carry 3 or 4 different “meant-for” knives for when the he’s here, one for one he’s there, and two for when he’s everywhere?  To cover all your “meant-fors?” All knives work well on an arm when someone is choking you. Dude, maximize your survival with the most versatile knife. “Meant-for knives” is like putting 2 rounds in a six gun, and then carrying 3 pistols.

Why in the world…WHY…buy a fighting, survival knife to save your life and the lives of others that is single-edged? And then…and then…carry it, and use it, edge inward?

You do know sometimes in a fight, things don’t always go as “stabbingly” as planned. The reverse grip, edge-OUT offers a slashing  possibility, an ADVANTAGE that might diminish the opponent. A double-edged, or 1/4 or 1/2 edge or 3/4s on the other side is ALWAYS going to be an advantage. 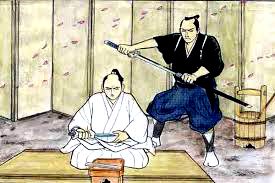 Reverse grip tip in accidents. When the Samurai commit suicide – seppuku – they do it with a reverse grip. There’s a reason for this. It’s easier. The tip is already aimed inward. (Incidentally, the helper that will kill him if he fails? Holds a saber grip.) This “easy-tip-inward” is one more point no one seems to consider when raving about reverse grips. The tip is often aimed back at you. About once every 4 weeks on the nightly reruns of the “Cops” TV show you can see a reverse grip knifer get tackled by cops. When they turn the suspect over? He was – “self-stabbed.” One of our lesson plans with the reverse grip is self-awareness of these maneuvering problems.

I cover dropping to the ground and we see people stab their thighs, and when tackled or shoved against the wall, we see the “Cops” incident of the accidental self-stabbing. Tell people to practice falling while holding a knife and watch the accidents. If people are running and holding a reverse grip knife, and they trip and fall? Watch out! There are more reverse grip “selfie” accidents than saber grip ones. Just be aware of this! 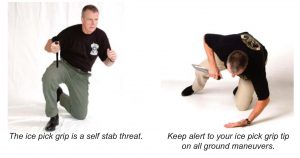 Having written my extensive and popular knife book, which took years, studying crime, war and forensic medicine, working cases and the streets, you discover that there are about some…what.. 30 or so ways to fight people with a saber grip and about 25 ways with a reverse group. But, after 8 ways each, does it matter? 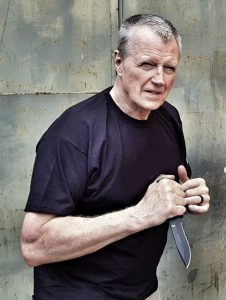 There are many pros and cons for each grip. I HAVE NOTHING AGAINST THE REVERSE GRIP. I teach it also and I believe better and more thorough and thoughtful than most…or I wouldn’t try. I just don’t like the blind acceptance, the secret whisper about which grip is the best and which is to be ignored. And folks, the single-edge-inward version is just dangerous nonsense. And It bothers me that people thoughtlessly accept courses about these things. Question everything. Get educated. Then pick a knife and a grip you need for your world.

The knife is a very forgiving weapon, in that you can do a whole lot of screwed-up, stupid shit with a knife and get away with it. This is not an excuse to stay stupid. You have to think beyond that to create a comprehensive program and promote real knowledge.

Look, I really don’t care what grip you use as long as it is an EDUCATED, informed choice, and not some mindless, mandate from some short-sighted, and, or brainwashed person, or from that ignorant knife whisperer who knows somebody, who knew somebody else, who…

Some Responses:  “Years ago I was grappling with my training partner and had a wooden training knife in the reverse grip. Long story short, we went to the ground and I fell on the training knife and caught the tip in the ribs. That definitely made my eyes water. Since then I’m very iffy whether I’d ever use that grip with a live blade in a real situation. I still train both grips but I much prefer the saber grip due to the added reach, maneuverability, and the sharp end isn’t pointing back at me most of the time.” – Neil Ferguson, USA

“I was at a seminar where an “expert” told us that if we see a man using a knife in that grip to “Run! That man is a professional!”  First off, I’m gonna run either way genius! A twelve year old can get my wallet with a two inch folding knife. Stitches are expensive!  Furthermore most women use that grip when they stab. Are they professionals??” Zane Issacs, USA  (This leads us to wonder, do we not run when the man has a saber grip? – Hock)

1400 how-to photos. 300 pages. Get the collector’s item hardcover, the over-sized paper back, or the spiral bound manual. Click here: 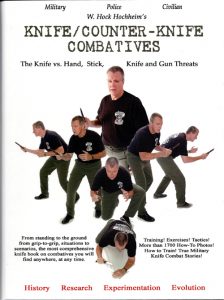