Back in the 1970s, the 80s and even the 90s, this phrase “the car as a coffin” was a warning, a cop-training-phrase, a “word to the wise” about being stuck in the car and being killed while stuck by an outside shooter. The advice was to…

“Get out of the car! Because the car is a coffin.” 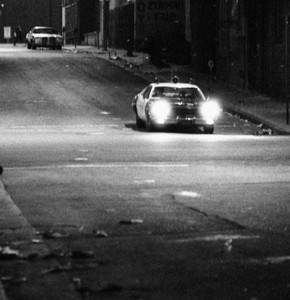 When things got hot and you predicted bullets could/would fly, or while bullets were indeed flying, you have to try and get out of the car. Get out of the car because the car is an enclosed coffin. So, we got out if we could, because you know, sometimes you can’t! We got out the driver’s side, or we planned on traversing across the front seat to escape, low and crawling, to get out the passenger side if need be. OR, I have had friends successfully dive under the dashboard while under fire.

But alas, that was the good ol’ days of big cars. Who can dive for cover under a dashboard in today’s cars or worse, today’s patrol cars? They have some small patrol cars today, and some big police SUVs too. But, have you seen the front seat of a police car lately? It resembles a miniature version of the bridge of the Star Trek Enterprise. Computer systems, like a Robby the Robot, if you will, sits in the middle of the front seat. You CANNOT traverse the front seat anymore! And in civilian cars, the popularity of the console traps you in the driver’s seat more than ever. 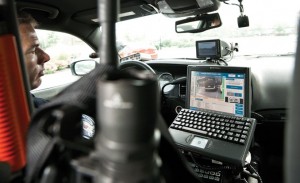 I followed this golden rule, but even when you believe in it, you can still get caught there in an instant. Like I did this one disturbing Saturday, summer night in 1980.

“Sixty-one,” the dispatcher said.
“Go ahead,” my reserve police partner Joe Reilly said.
“Domestic. Brothers fighting in back yard. The Starnes brothers. Mother called it in. 15 Jasper Street.”
“Ten-four.”
“Ask if the two brothers are wanted,” I told Reilly.
“Dispatcher, check wants and warrants on the brothers.”
“In progress. They’re clear.”
“Ten four.”

Damn. The Starnes brothers. Bout half-crazy, trouble makers. Almost twins, born so close and virtually look-alikes. In just about the same kinds of twin trouble. Drugs. Fighting. Burglaries. It wasn’t too late yet in the evening. About 8 p.m. Too early for the real trouble these neighborhoods brewed. We drove through the busy streets on the warm night. We didn’t need to look 615 Jasper up on the map. We’d been there before.

When we pulled up, Reilly and I got out and heard the loud argument in the backyard, behind the long, old white house. We walked up the driveway beside the house, passed through the metal, chain-link gate and into the yard.

The mom was there in a house dress, arms folded. A neighbor we knew by sight, a very big dude was calmly standing by and when he needed to, pushing the brothers apart. The bothers were neck vein, popping mad over something.

“Hey!” I said loudly. “What’s going on?”
The mother spoke up and relayed the problem which frankly, I don’t recall to report here. We all talked it over for a moment, and I appreciated the presence of the neighbor. But, upon our very arrival, the brothers wanted to disappear. Afraid of being arrested again? Something else? I don’t know. It seemed like our very appearance ended the fight.

Brother Buddy Starnes was shirtless and wearing very tight, light-colored jeans. This is important later.
Just about the time I was officially wrapping up the conversation, Buddy left prematurely. Looking back now, it was obvious he had something to hide or be worried about. He turned and walked away well before I finished, and I, casually, walked after him down the driveway. Reilly lagged back just a few seconds more to finish up with the mom.

I felt Buddy’s exit was a little too soon, but I really didn’t know what to do about it. He led the way down the driveway to the street, and I looked him over from behind. There weren’t any clothing prints of weapons that I could see in those tight pants.

“Buddy, next time, don’t leave until we’re through,” I said.
I wasn’t trying to be bossy, or a prick, but I wanted to say something to…to see what he would say or do.

He looked over his shoulder at me and gave me a real dirty look. Which, you know, “sticks and stones,” and a look never hurt me. But he strutted off onto the street heading in the way of a crowd of folks up the next avenue.
I walked around the front of the patrol car, opened the door and sat in behind the wheel. The very instant my butt hit the seat? I caught motion in the corner of my left eye.

Buddy was strutting back to me, his right hand borrowing into his tight right pocket.
Shit. I instinctively, instantly pulled my revolver. The window was already down, and I laid the 4 inch barrel of my magnum on the top of the door. Barrel right at him. It’s big and he saw it.

“WHAT you pulling?” I growled.
He yanked his empty hand out of his pocket and stood there. Expressionless. Looking at the hole in the barrel of my gun.
Now, I tell you I stared hard at the pocket. It was flat, flat, flat and his jeans were very tight. I made a snap decision that he could not have anything at all in that pocket, or any pocket for that matter.
“Get the fuck outta here,” I told him in a very quiet, sinister way.
Expressionless, he waited in a stare down with me and the gun, then turned and walked away in his original direction. I did not holster my Python. I just watched him walk off.
Reilly slipped into the passenger side, sat and was shocked at my position. Gun out, barrel on the door.

“Wha…?”
“I don’t know,” I told him. “He turned back on me, and it looked like he was pulling something from his pocket.”
“Okay!”
“But I can’t imagine he had anything in that pocket. Those pants are skin tight.”
I put my gun away, started the car and drove off. Not even a half a minute later…

“Sixty-one, are you still on Jasper street?” the dispatcher asked.
“Just a block away,” Reilly answered.
“Man shot on porch. 12 Jasper. Ambulance in route.”

What? I whipped the car around and blasted over to 10 Jasper. We slid up in front, ran up the to the porch where an older woman was tending to man lying on the porch. He was down and shot in the chest. I propped him up just a bit. We told her to get us a towel, and Reilly made for the trunk for our first aid kit. We plugged the hole. Applied pressure.

The old man could talk. He said he was sitting on his porch when “that boy” without a shirt in tan pants walked by, out in the street, looked at him and then shot him.
“Was that Buddy Starnes?” I asked while the ambulance sirens closed in on us.

“It coulda been, but I don’t sees real well. Real far. At night.”
The bullet hole didn’t look very big on his chest, but a chest wound is a chest wound. The EMTs got there and took over. Reilly and I jumped back in our car and I checked in with the dispatcher. I put Buddy Starnes out on the air as the shooting suspect.

We and other units scoured the streets for Buddy. Reilly and I made every nightclub in the district. Asked everyone on the street. For hours. Nothing. And boy-howdy, I knew I screwed up. I made a snap decision to let that little piece of shit walk off. He did have a thin gun after all, must have, probably a small, semi-auto in that pocket. That bullet was meant for me. But since he couldn’t shoot me, he, frustrated, walked off a few houses away and shot that old man.  I should have stepped out, and patted him down. But, I let a visual-search-only, trick my judgement.

I met with the detective on call that night, and I told him what had happened. He also hunted Starnes with us in his own car. I can’t remember which detective it was. He asked Reilly and I to write supplements to the shooting crime report when we got back to HQ.
CID worked up a case on Starnes. The old man lived. It was a .32 caliber bullet that didn’t do much damage at all. Within a day or two, the detectives found Buddy, but they never found the gun. He confessed to shooting the old man because he said he’d always had trouble with him as he was growing up. A cranky old neighbor motive?

But deep down, I knew what happened. I first ticked Buddy off. He wanted to shoot me in the car but I got the drop on him. And since I let him walk off, he shot that old man instead.
Months and a few years later, I would stop and talk to this old man a time or two, when I saw him on the porch in that same chair.

Even years later as a detective. He frequently reminded me that he and Buddy had problems since Buddy was a kid, and that is why he was shot, but I still feel like I was a precursor to his shooting. I know I was. What…what do you say to this guy, to make any kind of amends? The old man died in the 90s. I still think about it sometimes. A missed chance. A missed chance!

“The car as a coffin.” My good, trusty friend and working Texas cop, Jeff “Rawhide” Laun, told me that even now, 40 years later, they still use that phrase in police work and training. Even though they are now more captured today on the driver’s side of their cars with the techno systems in the middle of the front seat. No crawling across the front seat to escape! No dropping out the passenger door! No diving under the dash! You are stuck. The coffin shrinks.
But, this was as close as I got to being stuck in a car and shot. My friends have been shot at while inside cars and those are other stories. But, no matter how well I understood, and how much I believed and worried about that classic training line – “the car is a coffin” – in a single instant, I still got stuck in there.

I am alive today because several times over the years I got my gun out first and fast. I am not some kind of a quick draw artist, not at all. I am…just quick-to-draw. My gun just “appeared” when I needed it. Practice, I guess? If you have to shoot through the glass of your car? Shoot. Don’t worry about the finer points of trajectory and how the bullets will go slightly up or down due to the angle of the car glass. You don’t have time to run the math. Just shoot. Make a hole and shoot through that hole!

This story appears in Hock’s book Kill or be Killed 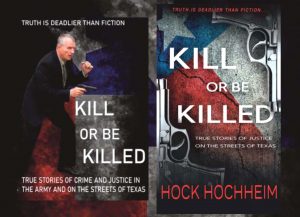