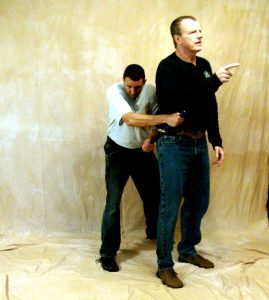 It has always mystified me that Filipino stick people virtually never consider from whence their stick comes from. I don’t mean the rattan farm. I mean from their body’s carry site. Like knives, the stick is just…in their hand. Poof! Magic. How did it get there, in hand, to do all their dastardly moves. Usually, it’s a belt.

I started in Ed Parker Kenpo in late 1972 and we never touched a stick. “I come to you with empty hands…” was the motto we memorized. No sticks. No stick carry site. But once in the Army Military Police Academy, I was taught the L.A.P.D. and L.A. County police baton course. It matched the NYPD version and was extensive with a ton of stick grappling back then. Now, all police stick courses are worthless, paranoid, watered-down junk, or gone.

We started the police course back then with…pulling out your stick! From your belt! So I had this grounding in stick, stress, quick draws since 1973. As with a pistol, you had to pull the damn thing out before you got to use it. It also included stick retention, because bad guys either wanted your stick or wanted to stop you from drawing your stick. Pretty important stuff. 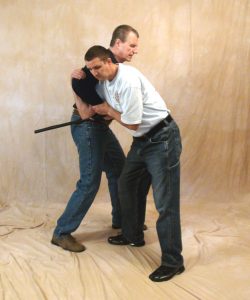 For an example of such stress draw  importance, in the 70s, I was dispatched once to two Army units brawling (on a gravel picnic ground). At least 20, 25 guys. I was punched off my feet by a soldier who did a 70s version of the “Superman Punch.” He and others landed on top of me and Superman was beating my face. I then…then…had to draw my baton from my belt. A…stress quick draw. (Did I mention the rock-gravel ground?) It is not always the stand-off, gentleman’s duel where you pull your weapon and declare, “En Garde!” Should you spend your life with a stick magically appearing in your hand? Like a pistol.  Or a knife,

The same baton course was taught in the Texas police academy I later attended in late 1970s. I started doing Filipino Martial Arts in 1986. The various systems have HEAVY doses in stick versus stick. Which, being respectful, curious and thirsty, I followed the progressions. But in the back of mind I thought two main things.

I mean, as a cop, I have responded to a few fights with various impact weapons. Two dunk guys fighting with softball bats at a tournament. Two business partners fighting, one with a tire iron, the other with a  crowbar. Stuff like that. It can happen, sure, but not much in civilized countries.  In uncivilized countries, there is also a lot of mixed weapon fights.

I did the entire FMA courses to black belts and instructorships. I survived , committing to the idea that I was studying…an art. A hobby. With only abstract benefits. This is true of almost all martial stuff I attended. A naivety of thoughtlessly exists as you fight the other guy, a mirror image of yourself, dressed the same, same sized weapons, with the same book of techniques.  Something I like to call, the Myth of the Duel. I have arrested a lot of people, and investigated a whole of cases since the 70s and real life doesn’t play out that same-same way.

But this lack of a belt and a draw concerned me as a doctrine problem. For a 4th degree black belt in Kempo in the 90s, we had to pick a traditional weapon for demonstration and scenarios. I fortunately picked the katana. I learned that Japanese martial arts concerning the Katana carry has belt-line, long-weapon retention methods I still find useful and show with modern, impact weapons.  Drawing of the katana from the belt is a big deal in Japan.

While we were in the Philippines, Ernesto Presas taught a 4-count, two-stick diamond pattern, nicknamed “Chambered Diamond.” You have to chamber your arms (hands virtually under your armpits) twice in the 4-count. He said, and only once, “this is how you draw your sticks!” Okay! You start with the pattern empty handed, then the chambering hands pull a stick from each belt side and you continue the pattern with the sticks. A STICK DRAW! You have to have a belt. But, that was it.

But I will tell you, 99.5% of the time, a stick draw is never mentioned in FMA. And lots of people in FMA classes and seminars NEVER have a street belt or even a martial arts belt on to draw one from. (This drives me crazy.) The drawstring, karate pants don’t cut it. I once had a major, major league FMA person a little pissed at me when he declared that there were “no belts in Filipino martial arts.” No belts? What? Huh? Said hero had never been to homeland/motherland. 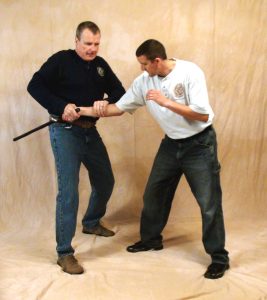 In my non-artsy, Force Necessary: Stick course, I use a lot of the old L.A.P.D. course and some of the Filipino material. It is “stick versus hand, stick versus stick (a little), stick versus knife and stick versus various gun threats world.” It very much includes expandable – collapsible  batons. It has an emphasis on stick-baton, stress quick draws because as I said, that thing doesn’t just appear in your hand.

When you ignore belt or carry-site, quick draws, you forget that you must draw one and you forget to retain your stick at it’s carry site from take-aways. Weapon disarmings,

On the other end of this list is you. And your weapon retention during that process. Lose it? Get it right back. Then you are the stick  grabber!  They call it “weapon recovery.” 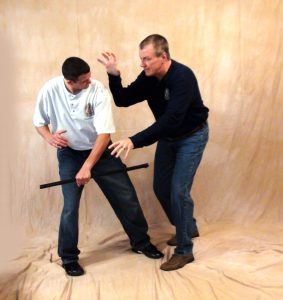 I cover stick retention (and knife and pistol) in two study groupings:

A lot of FMA stick vs. stick has disarms and counters (retention) but, when the weapon is produced (drawn) and-or used. And stick versus stick, and as I said, this comes in a hobby, art format. You have to work to glean and decipher useful, reality from it. Unless you are a hobby-ist, replicator?  In which case, copy on. Copy that!

I still teach Filipino material. I am happy to do it when asked. It’s fun. But I add my concerns with it, like drawing the weapon from a belt under stress.

I ask attendees in my seminars to wear “street clothes.” Pants with pockets, even shorts with pockets. And a “street” belt.  Wear a regular belt. We need all these things to train properly. Gun people might think me crazy that I even need to ask this, as it just makes utter common sense, but I deal with differing “worlds.” But, I sometimes also have to ask gun people not to dress like they are being dropped into Cambodia for two weeks. 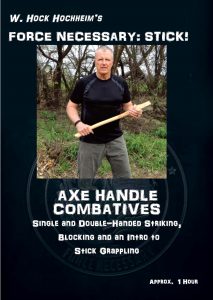