Old-school, double sticks and espada y daga training. We had to DEFEAT the sinawali pattern as the attacker CHARGES (not just standing there, but charging in!) doing a pattern, and we ended it with takedowns, which must be executed without your empty hands to grip the opponent, as your two hands are busy holding weapons. 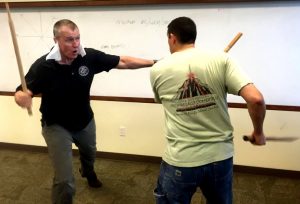 When Ernesto Presas had an experienced group with him, he highlighted this and other “endgame” training as vital. Just learning the patterns like dancers is incomplete.
Remember in the old days, Ernesto (and Remy) did not show high level materials to newbies, strangers and semi-serious students. So, if you only trained with the Brothers in big groups, you never saw this type of endgame stuff. One reason – you can’t start out at a high level in such groups, because of the mix of people’s skills in large seminars. Second, they absolutely did hold back their secrets to winning, in case they had to fight someone. Which they had to do in the old days. 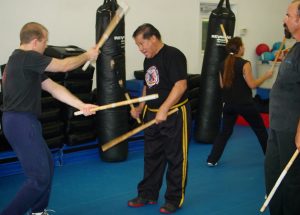 Anyway. we would hear- “Do not show this to everyone.”
Therefore, I fail to see this endgame practice in many modern systems doing double weapons. I just see the mutual dance of the double stick patterns. (In my opinion, too many people just learn the sinawali patterns and are happy with that. They end there. That is incomplete, as Ernesto Presas insisted and taught/instilled in me from the early days of Arnis de Mano.)
“You must learn to defeat de sinawali,”Ernesto would say.
Ernesto had a very analytical mind, when you look back at how he organized things. Remy wanted you to experiment. Ernesto wanted to list ALL the experiments. Which I think had a big lesson for me on how to organize things. But, I do think it is impossible to organize the “Filipino Martial Arts.” It is a gigantic, mix-matrix, that must be handled conceptually. I kind of chuckle when I see a book here and there, called, “Filipino Martial Arts” and its like…150 pages. Huh? No. It would have to be many, many, many more pages. This challenge was why Ernesto changed the system several times through the years as he tried his best to capture lightning in a jar. 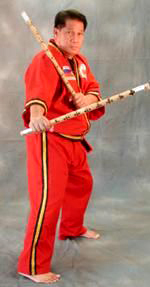 (I guess by now, everyone knows that you can do all the double stick patterns with espada y daga also. If you don’t know this? Try it. It will blow up your stick and knife drill work.)
This is what we did ala Ernesto in small groups…
The attacker attacks with one of the double stick or espada y daga patterns. He had us –
The disarms are usually impacts on the weapon-bearing limbs, or a block-and-stick-snake of some sort.
I have an old list of 14 double stick and therefore espada y daga, – the same with a slight nuance changes because of the knife – takedowns to do from Ernesto, as in doing takedowns while holding double weapons. This was “back in the day” when his 14 angles of double weapon attacks was his favorite forte to introduce training. I have learned that these 14 work against all wounded, disarmed and stunned attackers, 14 angles, sinawalis or otherwise. They are meant to work against all double stick and espada y daga patterns.
This way when you spar with double sticks or, stick and knife, you have an assortment of experience to do the takedowns. 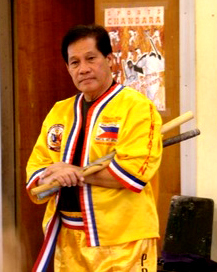 *****
Hock’s email is HockHochheim@ForceNecessary.com
Get a look at all of Hock’s PAC/FMA training videos. Click here 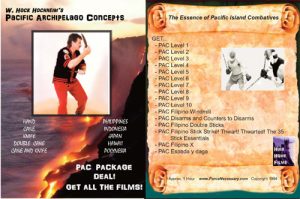