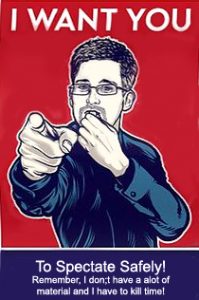 I was recently at a gun range where a terrific expert was running a class of about 22 on a topic. But when it came time to shoot, each shooter stepped up and…shot alone. One at a time. That means  21 students stood and watched as each person shot.  Many other lanes were open. This is a magnificent waste of time. Your time.

This is not at all just with shooting courses. In the last ten or so years I have seen this new stagnant version, this “observational emphasis” in combatives classes. I am not talking about the demo part where attendees see an instructor’s demonstration-lecture. That is expected. But when its time to “do it” many “new” instructors have two people step up and “fight.” And everyone else just stands around…and spectates.  And spectates. They are paying to…spectate!

I have been doing seminars worldwide for 25 years now and classes years before that, so you might listen to me on this point. I ask you, what is the seminar ratio of observing versus participating in your seminars (or classes)? Or the seminar and classes you pay good money to attend?

My point is not just about guns, but as an example, let’s say you are off to the gun range for a shooting seminar. Two, seven hour days. Twenty “gun” people signed up. When you get there, you discover that, after lecture times, only one or two people can shoot at a time. Yet, there are numerous, other, open shooting lanes available. Still, the other 18 people must stand and watch the 2 people shoot? And wait their turn? Is this the best use of your 14 hours (and money)  You will spend 12 hours observing, and maybe 2 hours shooting, participating.  I would say that this format at the gun range is counter-productive and makes for unhappy customers, or should if they have any sense.

I understand that sometimes you might be forced into this, into “waiting for a turn.” Such as a session with shooting around cars. You might only have one car out at the range and have to rotate people through the access. And, there are occasional, firearm safety issues with various topics. Common sense things that shooters understand, like taking turns working through a shoot house. Or take a bunch of “NFGs” (New F___ Guys)  in an intro machine gun class. You can’t turn them all loose! They need hands-on oversight.  And anyway, NFGs are often amazed and entertained just watching people shoot fully auto. I am not talking about these limited resource situations.)

I have been in these limited resource situations numerous times especially with sims ammo courses and I apologize and regret over their lack of group participation and too much stand-around, in “observation-only.” I hate to see paying customers congregate and wait. However…but…being forced into this by circumstances and apologizing, is different than ignoring them or not  allowing/planning for them.

That’s with guns.  Why should “stand-around” time, work within some fighting, martial seminars? When you attend a hand, stick, knife, self defense, MMA, BJJ, ballet, baseball, whatever topic, do you find yourself stuck in the teacher’s format where you are standing around, watching half, three-quarters or most of the training time? Do you mindlessly accept this idleness? Have you even thought about how much of your hands-on experience time is being wasted?

This unhealthy, “observational movement” in martial seminars that I find to be off-mission, distasteful and wasteful – this observe, “stand around and watch.” Maybe 1 group of 2, or 2 groups of 2, participate with each other and do the exercise. The rest, just…stand around, with their thumbs up their internal exits. Why aren’t all 20 people doing the drill in groups of two? Over and over again. Reps.

Think about this from the lazy and/or small curriculum, instructor’s viewpoint. This is a fantastic stall. Look at the seminar time it takes to observe 5 to 10 or more groups of two, one at a time, as they go through the drill. Everyone else watches. Does this pass the time? 20, 30, 40 minutes? An hour? Maybe the instructor pontificates a bit too. When instructors have only a little material in their repertoires, this kills a whole lot of teaching time. And it kills off the student’s participation/repetition time too. The clock keeps ticking.

There is always a warm-up concern too. Martial classes need a little warm up, stretching, etc. for a host of reasons, lest of all worrying about injuries. In an observational-emphasis format, the watchers cool down while watching-watching-watching and that could be for a considerable time, then they are suddenly picked to go into action. Some of these modern instructors think they are teaching the oh-so-real-deal, fighting too, (but often forgo realistic striking and kicking so they wind up, full-out wrestling). This cold-to-hot burst could cause injury.

These observe-emphasis instructors have some handy excuses for this observational-emphasis. They will claim that: 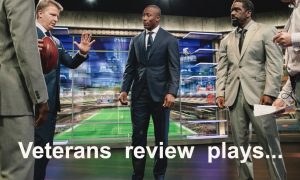 “Counters” to standing around. Having a good facility and some extra instructors is a great plan. For one example, years ago in Las Vegas, Steve Krystek of Progressive Force Concepts and I concocted a great, simulated ammo gun, set-up. We had several rooms at the University of Las Vegas. We wanted to run a car-jacking scenario outside and a restaurant, robbery scenario inside. We would be running ONE PERSON at a time through each! But what to with the some 24 people/students not participating in the scenarios? Plus, we also wanted to surprise each practitioner with the scenario topics by just walking them into concealed locations. So, we ran an interactive, safe ammo, pistol class in one big room with the 20 some folks with an instructor, and pulled two people out of that room, one at a time, to go through the car and then robbery scenarios. When done, we swore them to secrecy and shoved them back in the big room with the 20, to work out some more with the large class, and picked two new people.

Recently in Karl Rehn’s, KR Training in Texas we were challenged with running a weekend seminar of “shooting in, out and around cars.” Karl invented some ingenious methods and car-like inventions to keep separate, small groups busy for the live-fire portions. Small groups at several stations means much less stand-around time. Then with very safe ammo, we had all the cars in play in two-person drills for everyone. No stand around time! No…idle thumbs up those external exits. Make the observe/participate ratios the best they can be.

In any seminar, I watch – as the teacher, I try and watch everyone as they work out.

That’s the relationship. I correct if possible. Watching…as the teacher-watching is important. I try and watch everyone as they work out.  If the problem exists with several groups? I stop and make a point to mention it to everyone. That’s my job. Their job is to work out and experiment as much as possible in the confines of the material, raining time and location. I do not make everybody watch everybody else one at a time as a matter of time-wasting doctrine. This is a magnificent waste of time.

Numerous professional doctrines rail against the observation-emphasis. Alain Cain, old friend and Force Necessary Black Belt, retired British military war vet reported, “they had a lovely acronym in the British Army when I did my NCO course. ‘EDIP.’ It stood for explanation, demonstration, imitation, practice. The key point being as a military instructor, that at very least 50% of the lesson time had to be devoted to practice.”  50%…at very least.

What is the seminar ratio of observing/participating in your seminars? Or the ones you attend? I suggest you shave it to a minimum with inventiveness and ingenuity. Or shave off the instructors who do it mindlessly or on purpose.

Let’s keep these thumbs out of exits and keep everyone as busy as possible. 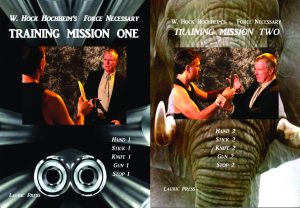