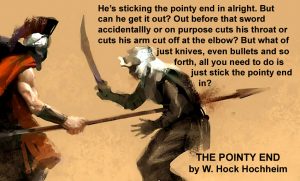 Like our Hoplite above. He stuck the pointy end in first, but then, what happens next?

THE POINTY END (Of Knives and Bullets)

“Just stick the pointy end of the knife in, that’s all you need.”

(Like our Hoplite above. He just stuck the pointy end in, yeah he’s first in, but then, what happens next?)
“Just stick the pointy end of the knife in, that’s all you need to know.” No training needed? I bring this up, because I do often run across people whose entire suggested repertoire for knife training, is to “stick the pointy end of the knife in,” that’s all that simple-stupid people need. KISS! They “keep it simple, stupid!”
Heard that before? I’ll bet. “Just stick the pointy end in”…and, it’s always a cute remark. It’s funny because, I do often hear this knife idea espoused by people who shoot a lot. Gun people. And they might spend thousands of dollars a year working on “sticking the pointy end of a bullet” into someone – ahhh, so simple -right? Why not then just say – stick the pointy end of a bullet into someone, that’s all you need. Why spend all that money, stupid? Obviously dumb to say, you’ll never hear it from a gun person, yet some regard the knife with one such simple, stupid one-step.
Wise gun people obsess-worry about shooting:
* positions,
* gear,
* skills and drills,
* grappling while armed,
* draws and interrupting quick draws,
* equipment,
* taking rooms,
* environments,
* target acquisition,
* related verbal skills, situational de-escalation,
* quicker kills rather than wounding,
* wounding rather than killing less-than-lethal methods,
* assessing the enemy,
* crime,
* war,
* and THE LAWs that will keep them out of jail,
* etc., etc!
As well the wise should worry! But some critics fail to make the same, gun-to-knife, connection with all these same choices and problems. Proper knife training requires the same litany list!
You see a connection? The abject lesson is, and the mere mention of the gun-guy simplicity statement as an example is, knife-gun, gun-knife (and with sticks too with nuances) will have most of the same problems.
While it is true that lots and lots of totally untrained people have successfully stuck the pointy end of knives, sticks AND bullets, into other people, but in the process of doing so, have also been counter-stuck-struck by pointy knives and bullets in the same split-second or in the overall encounter. This point is VERY important.
Knife fighting is more than just sticking the pointy end of the knife “in” the other guy. Like our Hoplite above. He stuck the pointy end in, but what happens next…stupid? Even the KISS method calls people stupid.
But even regardless of the gun connection example, and just considering the knife alone, for all training I ask – what exactly is “simple.” Simple can be different for every person, thing and situation. I guess we know it when we see it, huh? And speaking of formulas, it took Einstein to reboot KISS, by saying, “keep it simple, but not too simple.” And besides, everyone’s level of mentality and performance is different. What is plain ol’ simple for some, is very complicated for others and vice versa. Some people easily absorb and use complication as simple. Once again, it all comes down to the who, what, where, when, how and why.
Stick the pointy end of these ideas into your brain. They’re simple, but not too simple. 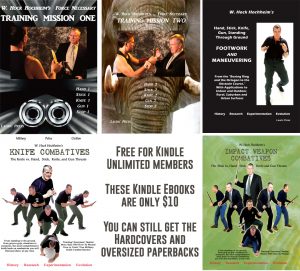