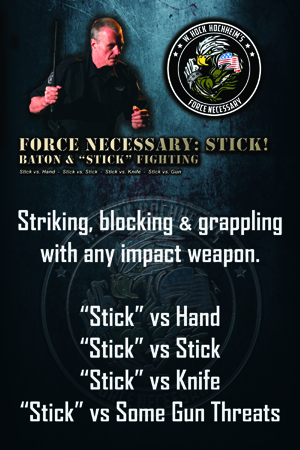 Situation-Based. Event-Driven. Combat-Scenario Based. Using only that force necessary to win and survive! Practical. Tactical. Innovative Stick Combatives. No Art. Just Tactics. Striking, Blocking and Grappling with an Impact Weapon. No promises. Just options to experiment with.

Force Necessary: Stick! is a course of options with both a single-handed and double-handed, impact weapon program Impact grips are interchangeable while in combat. It covers single-handed grip and double-hand grip tactics and strategies. Hock teaches the grips in an integrated format because, as you train, you must be able to transition to both grips instantly as needed to maximize your survival against criminals and the enemy soldier.

This Impact Weapon course is for martial artists, civilians, military and police looking for more than what is in their singular disciplines. Hock has discovered, after 40 years of research, training and experience that each group knows things about impact weaponry that the other groups do not know. Each can improve upon each other’s training. Hock has forged this hybrid course, like his other courses, to further this body of knowledge and training. This course stands alone and also represents one-fourth in a series of courses on Hand, Stick, Knife and Gun fighting.

If you want to learn more about the use of impact weapons, this is the course for you. It is developed for the seamless application of all single-handed and double-handed grip, impact weapon tactics in all ranges of standing, kneeling, and ground fighting, close quarter combat. Force Necessary: Stick! instructs the entire spectrum of conflict from concealed ambush and visual presence, blocks, attacks, crowd control on through to deadly force as legally needed.

This is a tactical course about YOU stick fighting, striking, blocking, grappling and ground fighting with your impact weapon against someone unarmed or armed with ANY weapon. This is not just about you fighting someone else with sticks as seen so often stick martial arts.  It’s about you, holding a “stick” and fighting an opponent who is unarmed, or armed with sticks, knives or guns.

Stunning, Disarming, Grappling and Restraining. The primary reason you carry an expandable baton, even a straight stick, and have these tools in your home and car, is to protect yourself from a criminal’s hand strikes, kicks, or his charge, or to protect yourself from the incoming knife attack, or blow from a hard, rigid-type weapon such as another club, a chair, a long gun, or any other weapon.

In this Force Necessary: Stick! course you will learn:

Hock teaching stick combat baton and riot control methods and tactical stick methods to hundreds of Force Recon, SOC (Special Ops capable) Marines at Camp Pendleton, CA. Hock is on platform to the left. During a period before 9-11, Hock made multiple trips to Marine bases in the USA to teach various combatives subjects.

Hock teaches the very same military and police materials at seminars like here in this Tae Kwon Do school to martial artists and citizens.

Hock’s courses change and evolve through time to incorporate changes in learning styles, law enforcement agency requirements and additional training methods as they become available.  If you need information about current certification requirements for impact weapons, stick combat courses or riot baton training and how they relate to previous courses, contact Hock directly at HockHochheim@ForceNecessary.com 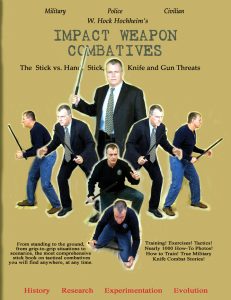