The last few years, my Facebook and Youtube pages have been peppered with various superstar guys doing/teaching theee….Tomahawk! Or Axe! I absorb the clips with some amazement, confusion and distaste. Am I seeing an audition for Flash Dance or real-life, “Axe Combatives?” Even I have mysteriously been asked to “do Tomahawk” in seminar sessions. The fad goes viral. Seeing the videos, geared to make jaws-drop, and also seeing the glaring mistakes even makes ME want to create my own axe course, though I have denounced the idea.

Mistakes? Before I start with this satirical, tongues inside cheeks review, I will state my “bona fidis” that qualifies my comedic opinion. I have had an hand axe thrown at me. I was attacked by a man rushing at me with a full axe. I have worked an axe murder, and several criminal investigations involving axe attacks. For many years I attended an annual “Death and Violent Assault “week long training school, where medical examiners from big cities flew in to discuss, show and explain their major cases for the year. Slide shows and narrative. Synopsis. These often included axe/hatchet murders. Axe autopsy reviews. Etc. Plus, I have co-instructed a few seminars with Dwight McClemore doing tomahawk. Dwight has spent a lifetime studying this subject. As a result of this background, which by the way, honestly, might be 100 times greater than most of those folks parading the globe with this-or-that axe/tomahawk course, I offer my farce observations.

In short, for starters, if I were to dare initiate my very own, axe fighting course, I would officially call it – Kathump! “Kathump” because when you actually hit a human being with an axe/tomahawk it goes kathump. In fact, it might go so far kathump, it might take a foot on that body part to work and pump the axe out. I am bedazzled by the flowing figure fours and multiple-step, follow-ups that the axe masters demonstrate when showing their moves in combat scenarios. Most of it should really stop at the first good, kathump. 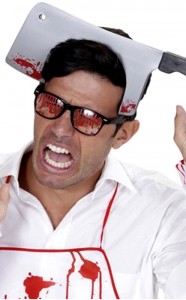 For example, there’s a video clip of an axe-man with a sweeping blow to head (simulated of course by going over the head because we can’t really hit the head) then he majestically sweeps down and hits the Achilles tendon or at very least, hooks the ankle and pulls in a foot sweep, and said stuntman/uke is pulled down. The mouth-watering, viewing masses, watching with their various rubber and plastic facsimiles in their hands cannot wait to simulate this two step, axe attack! I said to myself upon viewing this,

“Hold on a minute…wouldn’t that vicious swing into the head…just go…kathunk? Thereby ending the flow, thereby stopping at step 1, thereby no cool step 2, ankle chop-chop?”

Two steps? What of the three or more step sets they do? I have seen 3, 4 and 5 step axe moves taught, which clearly couldn’t be finished because of a step 1 or step 2 kathump. I just kept spotting motion-stopping kathumps. Doesn’t ANYONE realize the folly of what they are doing? Do they care? Should they care? Or are they just having Flash Dance fun? Do they not know they have to remove the embedded axe?

Is there a culture, or a country on the planet that in their early history, didn’t need and develop an axe of some sort for work or war? Axes were and are everywhere. Thus, it becomes easy for any martial arts maestro to whip a cool, axe-choppy-choppy, course because…because who in hell will actually research/challenge their info, especially those folks enveloped in “system-love” and “system-leader” love. (For the record I have written about this “over-love” syndrome many times before. If you love your leader too much? Love your system too much? This is not a scientifically good thing, as you will not question what supreme leader or supreme system does. You just follow, follow, follow the leader.) With this vast geographical expanse, with the exotic premise that, “the grass is always greener,” one can conjure/invent/claim any axe course from anywhere.

Different countries. For example, here is a history of the tomahawk. USA. “The term tomahawk was derived from the Algonquian words “tamahak” or “tamahakan." The Native American Indians regularly used tomahawks made from stone heads which were attached to wooden handles secured by strips of rawhide. They used tomahawks for general uses such as hunting, chopping, cutting, or mainly as a weapon.” It would be odd if a guy in Switzerland suddenly started teaching "Tomahawk." I also have my suspicions about lifelong FMA teachers who suddenly conjure a hatchet course from thin air, from say, ohhh… "Mindanao," swinging…American tomahawks? Because it’s a fad they want to cash in on. 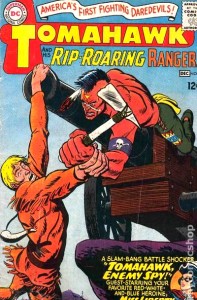 The Great American Tomahawk Company folks I knew in the 90s, was swallowed up by Cold Steel. In the previous years of the swallow, their “Ranger-esque” Tomahawks, touted as used by various US military units, were very expensive. Very expensive to me anyway. Over $150 as I recall. I looked at those simple, 17th and 18th century designs and thought about how I would rather have a modern, hand axe from the Home Depot or a similar home improvement company at $19 or $29, than something less useful for over $150. But now, Cold Steel is selling them way cheaper. Hey, Cold Steel is selling the training tomahawks now for about 13 bucks!

But having a simple, flat hammer head on one side like a tool, seemed very useful, unlike these classic Ranger hawks. After all, as with knives, soldiers use tomahawks for all kinds of lifestyle chores.

All these flows and motions? Look, I know it’s important to spend time holding a tool, a weapon, swinging it around. Hitting things, etc. Bonding with the weapon. I see films of people by themselves, just doing that solo command and mastery work with axes. A lot of things like figure 8s in the air, etc. I get the idea. I also see that the axe or tomahawk is used in trapping/moving the limbs of an opponent. I get that too. But to me, they seem to do and expect too much trapping, and trapping the exact motions of another holding/fighting an axe!

Axe versus axe? We live in a mixed weapons world, would you be always fighting axe-to-axe? Nope. I don’t think so. That gets a little crazy and off-kilter, but if it just a hobby? Who cares, as long as they know it’s a fun hobby. (After all, how many people want to work 28” stick versus 28” stick? Numerous. Endlessly. Yet nearly impossible to actually happen.) And how someone with just an interest in history? Have fun with your hobbies.

Fun? As a European friend and life long martial artist told me recently, he questioned an axe teacher at a axe seminar, with these same kathump doubts. "You couldn't continue after that chop!" my friend pointed out. The internationally known instructor replied, "but where's the fun in that?" I once asked a guy about his axe god/hero and how the demos and training would be cut by 2/3rds if they counted the kathumps as real. He said, "Then there wouldn't be enough material for a seminar."

And you know, people like to throw axes and tomahawks for fun, sport and hobby. Okay. Fine. It’s the combat scenarios that can really drive me crazy. And when the expert stands before an "opponent" and does 9 steps of buzz saw, figure 8 magic, that would really have ended at step 2 because of the…kathump. Jeremy Mayes calls it, "the tomahawk ballet."

What I would do if I invented an axe course? If pressed into the big Kathump fad? Well, the course would be much shorter. So short, the course might only be 90 minutes? No chance for a whole day or a two-day seminar. I would use the combat clock angles for attacks. I would use the statue drill as a formula to introduce trapping and passing. I would do some minimum limb trapping. The scenarios would absolutely include the deadly, kathump realities. Basically, I would process the axe through the classic SFC/Force Necessary formats, with nuance changes specific to the axe, and mixed weapon fights. Nothing from Madagascar or Monte Carlo. And, I wouldn't call it "Texican Axe Fighting," just because I am from Texas.

For fun? For history? For exercise? For bobby? For…self defense? No matter, the next time you see one of these axe or tomahawk masters do their flash-dance thing in scenarios? Stop and take a hard look, an examination of exactly when that edged weapon goes…kathunk.

And that is my tongue-in-cheek, satirical review of Axe fighting courses.

And stand by for- “Hock’s Made-Up, Kathump Axe Course from Nowhere!”