“…wait now, these are not your grandfather’s mitt drills! Read on!”

Focus mitt/pad drills are healthy exercises for practice and an important slice toward the big picture. Right lead. Left Lead. Standing. And of “late”- ground.  Most people in training just do the classic boxing school versions. In the late 1980s, I saw Larry Hartsell do these and he added "body, slap-mitt-versions" – standing and clever ground versions. These slaps were not seeking/intercepting the punches as so often seen, but rather body slaps that forced the trainee to cover up first and then counter-strike. This was not completely new for young, ignorant me, but he did a whole host of impressive and creative applications. I just called them Hartsell Slap Drills since in his honor, because they are here and there through time in other systems and have differing nicknames. These ground ones Hartsell did were done before the "UFC-World" before the "BJJ Invasion" and certainly before the popularity of "ground n pound." Punching and striking while grounded top-side, grounded bottom-side and grounded side-by-side. 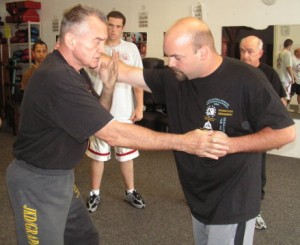 Larry checking a present, yet not moving, "other" hand.

To explain one Hartsell Slap Mitt Drill example quickly, a trainer slaps the left side (torso, arms or head ) of a trainee with a right-handed mitt. The trainee drops or raises his left elbow/arm/shoulder and absorbs the blow. The trainer then pulls the mitt back and over on the center line about stomach high. The trainee then hook punches this mitt with his right hand. I realize this might be hard to imagine without photos or a film. Look below at this sample we shot for a book in 2001. These can be down with the jab, cross, hook, uppercut and overhand, standing, kneeling and on the ground. 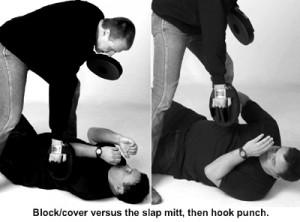 So…right, left? Jab, cross? Let’s take the common punch. Did you know that many military courses for many decades did not designate the difference between a jab and a cross? They just called it a “punch.” A "punch" from the right side and a punch from the left side, no matter the blading of the body was just called a punch. This simple approach does help through various drills, but in other courses, certainly modern ones, people (me too) like to fine tune training and use the lead shoulder jab and the rear shoulder cross definitions when possible, because they do offer differing training drill opportunities. Of course if you are doing boxing-based programs you absolutely need the “jab-cross” distinctions. But when “MMA-ers” get down on the ground and ground n’ pound? There really are no right or left shoulder forward leads. Just…punching.

But, what of citizen self-defense, security, police and military? Are stand-up, sport, boxing mitt drills alone the best we can offer them? No. We can add more stuff such as the "while held" and "while holding" versions just to name two. Here are some things I do, that I have "invented" or added. First off, we must mention you can experiment with all the strikes, not just punching. And, there are thrusts and hooks with each. Here are the strikes and the some situational mitt options.

Position 1: The Arms-Down, Bus Stop (or sucker punch) Stance – Do a series of right and left strikes. Some folks also like to chase a mitt a bit from this position, as in taking a step in to hit.

Position 2: The Conversational Stance  – Long-called, the “Italiano” strike from high, moving conversational hands. Do a series of right and left hand strikes

Position 3: The Surrender Stance – Strike from this hands-up, surrender position. Some people brag that they will never have to do this because they will never let anyone get this close, of if someone got this close, they would jump to a fighting stance, etc. R-i-i-i-g-h-t. Life is a surprise. Life is an ambush. And while you may be Spiderman, your students might not be ever so alert. Do them a favor and let them do these. This is often part of a weapon confrontation, but not always. Do a series of right and left hand strikes. (this s also a sucker punch strike) 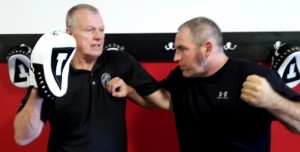 Position 7: “While Held” Mitt Drill – the trainee's arm is held/wrapped by the trainer

Position 11: Knees? – Do you want to experiment with all of these, knee-high? In this format? Go right ahead.

Position 12: Improvise! Who, what, where, when, how and why do people need to strike sometimes?

Of course the mitt can be fed horizontally and with a thrust, simulating that kind of a thrusting strike, but not to be confused as a feed for an uppercut. I am not a fan, as they say, of these prolonged, over-programed mitt drills. I think people with a good eye, can tell by looking at them, that they are too structured and just way too long.

I was in a Thai system for awhile that really over did mitt drills, and almost never sparred. I think this is an "training equation" mistake. Nowadays, there are fitness-boxing classes that only hit mitts and bags by design. No one there wants to, or expects to spar. Whatever, as long as folks know what they have signed up for. But, a few extra situational positions and mitt drills can add a lot of physical exercise and experience to survival and sport fighting. And you can do some of these on a heavy bag too. 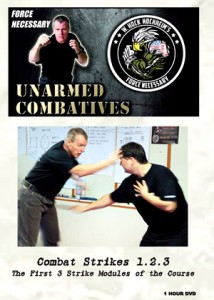