(…Or, what’s on your feet, Mister Survivalist?)

This “Mudda” title use to be a 1940s, 50s and 60s insult, bringing sons into fisticuffs over their beloved mother’s reputation. To this day, I still don’t get the insult. And today, many mothers wear combat boots, proudly. Their offspring share the pride. And, fashionistas do too!

I mention this pedal region insult because I was recently treated to yet another youtube street fighting video and watched two people spontaneously erupt into a sloppy fight. Both were wearing the proverbial flip-flops, slipping and sliding in them, and half-losing them. As usual the participants were stumbling and falling, from a host of reasons, but insecure, half-assed footwear contributed.

Got me to pondering about shoes. Shoes, boots, flip flops, sandals…fights, chases, climbs, leaps, escapes…a lifetime of footwear concerns as they relate to survival, fighting, sports and enforcement, military performance.

In the “Who, What, Where, When, How and Why” of life, the “What Question” covers the “what are you wearing? And shoes are part of that “what-closet” as are a few sub-questions like “when do you wear…?” “Why do you wear…?” 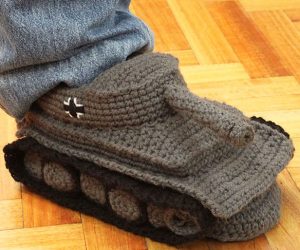 The guys and gals we see in these fight videos slipped on fast and easy footwear that day. Why not wear these light beach thongs today? Even the toughest-prepared-tough-guy might think that. They might have said…

“I’m just getting a bagel!”

I am sure that in the many fights captured by cell phones, the participants who slipped on lame footwear didn’t think they would be dancing around in their thongs or sandals that afternoon at the grocery store or on a parking lot. And, I am also pretty sure that some of these hardcore store-runners, chore-runners and egg sandwich seekers that slip on flip flops are also wearing a gun. Maybe even more? Knives? A flashlight? Spray? All that, but on go the flip flops. Those are bad treads on your tank in a fight. Aren’t they? Mr. Survivalist?

Regardless of being in a fight, skimpy sandals and thong, flip flops are risky. For example, the “British NHS spends £40million a year treating injuries caused by wearing the casual footwear. More than 200,000 people visit their GP or even end up in hospital every year after suffering falls or developing long-term problems. But experts are warning of the dangers of prolonged use, such as the risk of shin splints and joint pains. They say flip-flops force people to change the way they walk so that when taking a stride they put pressure on the outside of their foot, rather than their heel, causing long-term damage. And there is also the risk of serious injury from tripping over. Frequent complaints include twisted ankles, but some have broken their arms or wrists after falling because their flip-flops caught on uneven ground.” Read the full report here

Even the somewhat popular “Combat Flip Flops” made by vets, have the tagline, ”Bad for running, worse for fighting.”

Common commercial sandals have a few more straps than these thongers, not as many as say – the original Roman Centurion sandals of yesteryear. In pondering “sandal combatives,” I am reminded of the Vietnam era, “Ho Che Minh Flop-Flops,” footwear worn by the Viet Cong during the Vietnam War and a nickname probably unknown or forgotten by the great unwashed today, but if you were in service during those times, you remember the moniker. 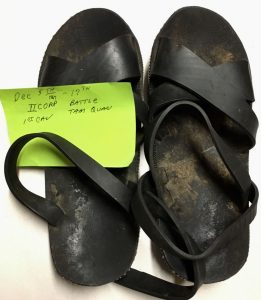 Professor Google reports – “These sandals set belonged to a member of the Viet Cong and was brought back to the United States by an American veteran as a trophy of war. Ho Chi Minh sandals are iconic for having been worn by the Vietcong during the Vietnam war.

These Viet Cong characters did a pretty god job messing with us in these cheap sandals, but tunnels, improvised bombs and guerilla warfare helped them out. The North Vietnamese Army wore shoes, but some are photographed in sandals too.” 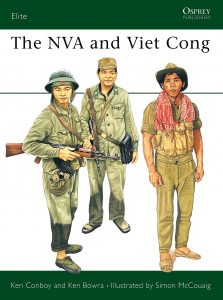 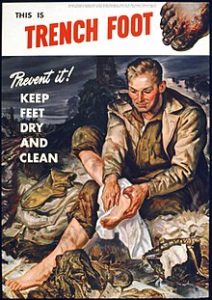 Flip flops abounded in the era though. There was a terrible problem of “trench foot,” later called “foot jungle rot” to be sorted out back then with some powders, and sunshine with flip-flops. This was a diagnosis given those poor bastards, the “booney rats,” cast out in the jungles for days, weeks at a time.

There were of course “jungle boots.” Again Professor Google advises – “The use of ‘jungle’ or ‘hot weather’ boots predates World War II, when small units of U.S. soldiers in Panama were issued rubber-soled, canvas-upper boots for testing. A pair of jungle boots weighed approximately three pounds. Adopted in 1942, the design of the jungle boot was based on the idea that no boot could possibly keep out water and still provide sufficient ventilation to the feet in a jungle or swamp environment. Instead, the jungle boot was designed to permit water and perspiration to drain, drying the feet while preventing the entry of insects, mud, or sand.”

“In the early years of the Vietnam War, some U.S. Army soldiers used the ‘M-1945 Tropical Combat Boot’. 1965, newly-developed footwear was developed using developments since the end of World War. Although the weight increased, after American foot injuries from punji stake traps, their jungle boots used a stainless steel plate inside the boot’s sole to protect the wearer. Later jungle boots used nylon/canvas uppers instead of cotton duck. The footwear received other improvements.”

Troops of the Vietnam era (and now) also acquired some of these primitive thongy, flip-flops to wear to, fro and in the showers because the floors could be considered petri dishes. “Ho Che Minh Flip-Flops” soon became the nickname for all flip-flops and  “casual wear sandals.” This flip flop style of footwear reportedly originating as early as the ancient Egyptians in 1,500 B.C, but here in the US of A, footwear manufacturers claim the flip-flop descends from the Japanese zōri, which became popular after World War II era as soldiers brought them back from Japan.  But anyway, sandals, flip flops and sunshine were a big prescription for such foot problems. Given all the booby traps and nasties in the jungle, given a chance to wear foot protection, I think most would pick the foot protection over flip-flops when tip-toeing or scrambling “out there.”

In my days, the early and mid-1970s, in Army basic training and the military police academy back then we did everything in combat boots. Shiny ones. 10-mile, forced marches with full gear, obstacle courses, you name it. Boots. But we were taught some foot and shin care (shin splints being the next higher-up, problem) and we had plenty of Uncle Sam socks to change into daily if the Drill Sergeants didn’t hide them while we were gone. We ran our final physical exam 2 milers, in combat boots.

When I was a patrolman and investigator in the Army and even in Korea, I was never far from civilization and a drawer full of socks. But we were in boots (except of course my plain clothes investigation days) Day and night. Boots. We ran, we chased bad guys, climbed, we leaped over buildings…ah, no fences actually… in a single bound! We battled criminal soldiers and I always thought, wouldn’t life be lighter, faster, better in athletic shoes?

Enter my follow-up years in Texas police work. On patrol we could wear black cowboy boots or black, no design, lace, shoes in the late 70s. It was Texas and there was the insinuation that we should wear cowboy boots, but I immediately found the lightest pair of black plain shoes I could find. At K-Mart! Whereupon I continued the fine police tradition of running, chasing, leaping over stuff, climbing stuff and wraslin’ and dukin’ it out with bad guys in lighter “rubber’ shoes. Life was better, faster, smarter.

We need athletic shoes I yelled! Some of my Texican colleagues disputed my views, claiming:

Darwin would be proud. Years passed and a new series of lighter, athletic high ankle or short ankle police shoes came around. Black shoes of all sorts became “legal” to wear. Sneakers became standard-issue for the military after Congress passed a 2017 defense provision requiring the military to provide American-made, athletic shoes to recruits directly. Troops were supplied with running shoes. Boot “technology” improved also. Darwin would indeed be proud.

Martial artists are usually barefoot. The usual three reasons given are to “toughen the feet,” and “tradition” and really, mainly  – “to save the expensive mats.” If I am forced to go shoeless when teaching in a matted school, I will at least wear socks. First off, no one wants to see my Dumb and Dumber feet. I don’t want to see yours. Secondly, statistically I will be fighting with my shoes on. “Wear what you will be wearing when training!”

Did you know, that “deep-in-the-weeds survivalists” suggest you should always wear the best athletic shoes when taking a plane trip. These experts say that should you survive a plane crash you need the best, solid, tight footwear to escape the split, burning hulk.

Weyland Billingsley checks in with more – “When I teach disaster classes for the Red Cross, I always tell people to wear real shoes. If you are going to a “safe room” for a tornado or hurricane, wear sturdy shoes, jeans and a long sleeved shirt. Otherwise you will be picking your way through a debris field in flip flops and shorts. (Others advise strapping on your bicycle helmet.)

I am not here to sell these new, great hiking sandals. They are like “near-beer,” as in “near shoes,” and are quite tight-fitting and protective. Given this general concept shouldn’t we all be wearing great shoes all the time? Even when buying bagels? There are after all, people who wear their guns inside their house to be safe and I have seen TV gun shows where residents walk out to their mailbox with a pistol AND an emergency medical kit on their carefully considered belt. Should I live like this? Should you? Should I be sleeping with my escape shoes on every night? Certainly with a pending storm, or going to a frisky neighborhood, or maybe even on a plane.

BUT! To me, for my insanity and paranoia, this also enters into the “What, When and Where Questions.” All the Ws and H questions really. When and wear do you, should you worry about such footy things? Realistically?

George Carlin once said, “Religion is like a pair of shoes…find one that fits for you, but don’t make me wear yours.” I am just suggesting, think about your shoes! 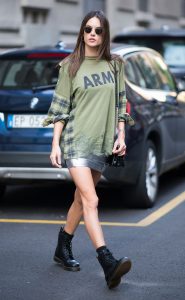 Read More! What Are You Wearing? 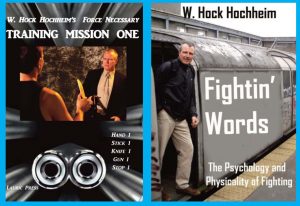