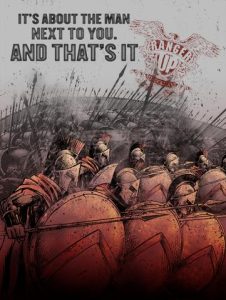 The man next to you. You hear this idea a lot. This is a new shirt from Ranger Up with the old message. My mind wanders every single time I see this message.

On one hand, survival dictates that IN THAT HORRIBLE MOMENT, it is absolutely true. That bad situation, it is absolutely true. There is nothing else to think about, nothing else to do but survive. Take the survival steps and task at hand. You, he, she, it, we, they…are not gonna make it unless to do as a team. You have to fight with and for your unit in the heat. Yeah, yeah. I get it.

Then my mind wanders.  In so many eulogies, you hear the justifying phrase ” He gave his life for…” usually it is not only, for the guy next to him.” Usually there is more to the eulogy.  So, then you have the other hand to consider. Survival experts, caretakers, psychologists and psychiatrists discuss, lecture and worry about war things before and after. Perhaps during.  They worry about – the cause. Yes, the cause. They say that in order to survive the before, during and AFTER, people need a cause to believe in. To fight for. The term is “belief system.” This, they say is essential. You have to believe in something to be motivated. Some say it’s religion. Some say it’s patriotism. Some say it’s good versus evil. Some, money. But they say you need something. You cling to something to justify and survive in the long term.

Who, what, where, when, how and why did you get to that battlefield? Is the man next to you also symbolic of that overall cause? Why are you there fighting anyway? 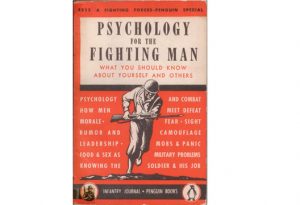 Can you find motivation in just surviving the battle moment? Yes. But let’s look at this really cross-ways for a moment. Reverse psychology if you will. Pick up a Ranger unit and drop them into Russia, to fight to the death FOR the Russians and communism, against…oh…say…Canada…for example.  How motivated would American Rangers be in this? Killing Canadians? How would they feel being recruited, trained and transported to the Arctic to kill Canadians for communism? How motivated would they be? Sure, in the split seconds, the intense close quarters of battle they would defend themselves and their friends. They’d fight for the guy next to them? But, they are ordered and then have killed Canadians for Russian communism. Is the “guy next to you” catch-phrase just fine and dandy to justify it all? Do you think for one moment that American soldiers would be happy winning such a killing battle? That “the man next to you” motto is all they need to be happy with themselves until they die?

The belief system. For me, as an example, I have been long disgusted with American politics and the people involved in it. But, I believe in the “IDEA” of America. The republic. What it should be. What it can be.  The idea keeps me a patriot.

Globalists hate the word “tribal.” Yet most insects, animals and people tend to be tribal, if by geography alone. The banding together in the small and big picture happens. And tribes create belief systems. Anyway, I always think about “both hands” when I see this simple message about the “hand-to-hand combat” combat range and the instant of battle. There’s there’s the big picture, the micro (small) and macro (large).

The Micro – in face-to-face battle seeing what’s happening at the tip of your nose. Survive!

The Macro – in the big picture of the war. Why your nose is there in the first place.  And what stinks afterwards.

Hock can be reached at HockHochheim@ForceNecessary.com

Get the Fightin” Words paperback. Get the ebook. Click here.