(For starters, police work was  a little different 5 decades ago…) 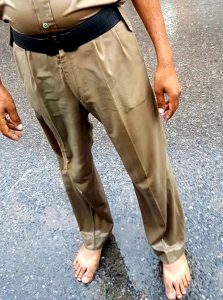 Back in the 1970s I wanted to finish college, so I reluctantly requested a transfer into what was called the “relief patrol shift.” I say reluctantly because I enjoyed my time with my regular rotating patrol shift, led by a Lt. Gene Green and Sgt. Eric Jackson. While I really, really liked these guys, and liked working for them, college loomed. The relief shift had the same hours each week, was partially created for police college attendees, and was mathematically inserted inside the oddball eight-hour, rotating-shift openings.

But the relief-shift math wasn’t completely perfect. There were shifts and days each week that had no personnel gaps, and we of the relief outfit were just added to the manpower of rotating shifts. Week after week on certain nights, the regular rotating-shift Sergeant would look at us relief patrolmen and wonder what in hell to do with us.

We would often be assigned in the same cars as partners. Thus, for quite some time on Thursday nights, I was partnered with Sal, the barefoot policeman. Sal and I always had a blast every Thursday night on the 3 p.m. to 11 p.m. shift. Sal was already a vet at the police department, and he was a hysterical fellow with a great sense of humor. He was a little bit buck-toothed and a real country boy. He was kind of shaped like John Wayne and would often wear his revolver like the Duke way back on his belt near his back pocket. He would casually rest his forearm or hand on his gun handle like Wayne did,  which really stretched the leather holster through time. Eventually, it sort of flapped around back there when he walked.

Quickly, before we get to the barefoot angle of this tale, one of my favorite Sal stories, is when he and were patrolling one night. He spotted a U-haul, rental truck on the highway without rear tail lights. This was a pet peeve of his. He said,

Michigan license plates. We hit the lights and did so. He stopped. We strolled up to the drivers door of the truck and Sal took his Duke  pose, hand resting on that gun far back on his hip. This poor driver was a hippy looking sort for back then, long hair, beard and all. He was scared to death when he took a look at us, stopped in the dark, by us two rebel, redneck heatherns… 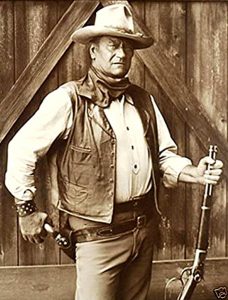 “Wha…whaa…is…is there a problem, officers?”

And this poor kid, you know probably use to professional police jargon – “Good evening sir, may I…” just stuttered, babbled and just melted away in shocking fear.  And of course, we let the kid go with just a “be safe” warning. We are not savages!

They say that Sal started out a very gung-ho officer, but after being unfairly (his version) bumped off a sergeant’s exam list, his spirit was broken. Since then, he just wandered through his 40-hour workweek barely getting by and irritating supervisors and citizens alike. He left our agency for a while and worked in Colorado. But they fired him.

“They told us to leave the tourists alone,” he told me of his Aspen days. “Tourism was their bread an butter.” But, one night he beat up a drunk driver, tourist and was fired. We hired him back anyway. Cuz…well…this was Texas. Sal explained to me what happened his last night in Colorado. “I arrested a tourist for DWI. Drunk as a skunk. I had him at the jail house and that son-a-bitch kept reaching over and tearing up the DWI report I was writing! I’d get half finished with one of them, and he’d lean over, make a face and grab it and rip it up. Sheeet. I did it over. Rip. I did it again. Rip again. You can’t pull that shit back here in Texas!” Sal told me. “So I hit him. I mean, that’s what we’d do here. Hell, those Colorado pussies fired me.”

That was one tale rehashed on many a Thursday night as Sal and I patrolled. It was not uncommon for Sal to ride shotgun and let me drive. In fact, I cannot recall a time when Sal ever drove. Too much work I think. It was almost a weekly routine for him to buy a big over-sized bag of caramel-covered popcorn. He’d open the bag and start eating. Sometimes he’d eat Doritos, but usually it was the sticky brown popcorn. We would drive around; and if we had a break in calls, eventually Sal would remove his cowboy boots. One at a time to let his feet…breathe. Often, next off came his white socks. I don’t know why? Pick at his feet? He would commence to pick his toenails, preen, and massage his feet … and eat popcorn from the big bag. And, yes, absent-mindedly he would sometimes offer me some popcorn, which I would decline. Toe fungus, ya know? It spreads. He would sometimes produce silver nail clippers and with great intent carve away at his feet.

Meanwhile, I was still young and in my gung-ho stage and would aggressively patrol. Sal would curse at every call and gripe every time I dared initiate some action, especially once early in an evening shift. Just before sunset at rush hour, I spotted a car bust through a red light in a hurry. I accelerated after it, and Sal started in with his usual gripes,

“They ran a red light. Big time. That Chevy almost hit him.”

This was work, and he did not want to work. He wanted no part of it. I wanted to get into something. It wasn’t the ticket I was after, but rather “what kind of shit I could get into” (as the common phrase said). I might not write him a ticket at all. Just check things out.

I had to blast the siren to let the driver know I was serious, because he seemed to ignore me at first. In the front seat next to him was a woman and another male at the passenger-door back seat. When the car finally pulled into a business parking lot on Dallas Drive, I got out and approached the driver’s door. Sal, barefoot with his bag of popcorn on his lap, remained in the squad car.

I collected the driver’s license and returned to our squad car to run wants and warrants.

“What he say? Huh? What? What?” Sal was always over-curious and eagerly interested even though he took no action.

“Oh, nothing much,” I told him. I started running the guy’s name and DL on the NCIC. I sat in the driver’s seat with the door open and one foot on the ground.

“The subject is wanted in Dallas for burglary.”

After getting some of the details from the dispatcher, I walked up to the car and asked the guy to get out and talk to me, which he did. I told him the bad news, and he started declaring that the system had made a big mistake, etcetera. I honestly cannot remember the guy’s name and what he said. It’s been about 45 years now. But what happened next? I couldn’t forget.

When the driver complained loudly about the arrest warrant, the passenger door flung open. And the other male passenger got out. Sal popped his patrol car door, as like it or not, he was a vet. The guy took a few steps toward me, and Sal got out, boot and sockless. Then the passenger turned and ran like hell across the business parking lots.

I itched to chase him, but what could I do about my burglary suspect? I couldn’t leave him here. Just as the instant the quandary hit me, here ran Sal right past us… barefoot … in hot pursuit of the passenger. He was after all…still…a vet.

“Goddamn! Ya-little-mother-fuckin’-stupid-shit-son-a-bitch, I will shoot yer ass down, ya.…” Sal emitted in one long, cussing stream.

Did I tell you that Sal loved to play golf? Total addict. Daily. And he really wasn’t in too bad a shape. He hotfooted, barefooted across the A-1 Cleaners, Dallas Pawn Shop, and the 7-11 parking lots after this kid. The lots were too full of customers for Sal to shoot at him, which I know he had a hankering to do at those chase times.

“That…that officer has no shoes,” the burglary suspect said calmly to me, as we watched him run by.

“The pay ain’t much around here,” I told him as I cuffed his hands.

Off in the distance, Sal had caught the kid by the 7-11 gas pumps, had shaken him around a bit, and then cuffed him. He marched the kid back with a hand on the scruff of his neck. Of course, many people on the lots, stared in amazement at…the barefoot policeman.

This second kid had drugs in his pocket. LSD. We arrested both of them. I searched the car and found nothing illegal. The girl had no record, and I let her drive the car off. On the way to the jail, Sal put his socks and cowboy boots on. He appeared in complete uniform at the station book-in room.

The next Thursday night? We had a few laughs, patrolled around town, stopped at a Gas-N’-Go, and Sal bought himself a big bag of caramel popcorn. Two hours into the shift he was happily munching away and picking at his bare feet.

And all things were right in heaven…

This is an excerpt from the upcoming Wolfpack Publishing collection, Dead Right There 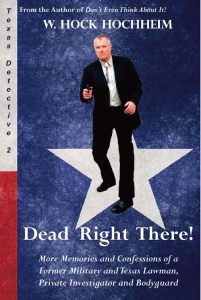