I don’t really have many irritating pet peeves. I am usually quiet and calm, trying to stifle frustration. Live and let live. But some things drive me bonkers.

One thing? Whack-job, knife grips. Silly, goofy, worthless knife grips where, if there are ANY accidental or on purpose contact with the knife, the knife will fly from one’s hands. The good news is, just about everyone seems to understand this very simple concept. Everyone knows you can’t dress a deer, cut a Christmas turkey, even slice a white-bread, baloney sandwich with a poor, lame, open-fingered, hand grip on a knife. Do you think a carpet-layer, or a chef or a butcher works with half-a-hand grip on his knife handle? No. Least of all then, what about stabbing or slashing an arm-flailing, person in a fight for your life? Stabbing or slashing clothing, flesh and bone? 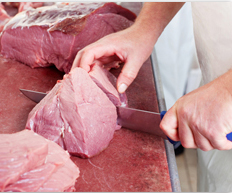 One needs a decent grip on the handle of a knife! We all assume everyone knows this? Right? You need as much hand as possible on a highly-textured, knife handle. After all, it’s a fight, and arms and bodies are slinging everywhere. Everyone seems to understand this very simple concept, except some – not all – but some Filipino (and yes, some Silats) martial arts heads and systems – who mindlessly perpetuate these…cancerous grips.

The Cancer Grip is name I coined in the mid-1990s, and wrote about in magazines and books. It’s a nickname for when a person hikes their thumb and ball of thumb up off the knife, leaving only four fingers on the handle and a substantial opening at the top of the fingers (try slashing anything with this). Some of the BIGGEST names in Filipino martial arts slip into this lame grip. I have even seen a Filipino guy teach an ENTIRE knife system with this high thumb grip. This is a thinking disorder. But wait…quick take some anti-vomit pills…it gets worse because there are some FMA people that lift the thumb and…and I say…AND open the pointy finger of the grip. Some even add an open pinky- now TWO fingers hold the knife! 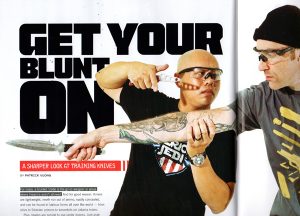 Case in point, I don’t usually buy any the Recoil-style magazines as they are predominately catalogs with random articles in between. But I do thumb through them at airports. One is called “Concealment” and I zipped through it on a long Christmas, cashier line. Lo and behold, there in a double-truck, two page, photo spread, someone yet again, in the year 2017, almost 2018….with the Cancer Grip, AND with the pointy finger sticking out.  Will mankind never evolve?

The knife used in this photo – ironically – as designed – has for a “spine,” a smart, curvy place to secure the thumb, yet…

In the late 90s when I started writing about this grip, I took a lot of heat from various system and Guro fan-boys. “How dare you question Guro_____ and Pyeong_______!” Ordinarily, Guro and Pyeong do good stuff, I like them too! But on this one thing? No. And I never mention their names or the systems, (don’t here again) I just ridiculed the grip. This grip was also on the cover of a popular, “tactical” guy’s, 1990’s knife book, he being yet another thoughtless, victim of this cancer (and another person with just about zero, real-world experience.)

I recall one debate with folks in Germany. “WHAT?” a “_____ _____” student said to me when I mentioned this. “Huh? How…?” Then he ran home to Berlin to check with his “_____  ______” masters. He returned to explain to my ignorant self what his masters said, “What Hock doesn’t understand is, when we actually stab, at that very instant of contact, we close down the thumb.”

-Second, what about slashing, Einstein?

-Third, it is still an utterly freakin’ stupid idea to barely hold a knife, in any chaotic situation, such as combat, or even a tool-like job, in this lame manner. Remember in a fight your target is moving. Your instant of perceived contact, stab or slash, is just a split-second guess. Anyway, do you want to keep pumping your thumb up and down? Up and down? Think you can remember to do that in a fight for your life?

The only thing that poor, ignorant Hock doesn’t understand is why people do this at all or try to make excuses for this. Bubba, it’s a screw-up. It’s a very dangerous screw-up. It is cancerous because people like to imitate Guros and Pyeongs – mindlessly –  thoughtlessly – then the infected return to their classes where their students mindlessly imitate them. Then one day…too many people are doing this, mindlessly. Then, it’s in a national magazine again. The public snapshot of a silly, fucking knife grip invades the young minds of mush. Art imitates life, life imitates art. It’s like…a… little…cancer. 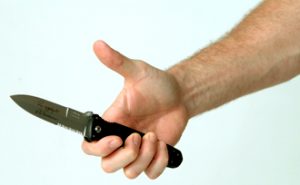 And after a stab, often an “evacuation” of the blade is needed, to get out of blood, guts and bones and clothing. I have worked numerous police cases where people were stabbed and the knife remained stuck in the body. Without putting your foot and shoving on the other guy off the knife, (standing?). The most common fix is twisting the knife at the hand, or hand and wrist, or hand, wrist, elbow. (The Marines use to call this  “crowbarring”) This also makes for a more grievous wound. This common twist escape cannot be done with the Cancer Grip. 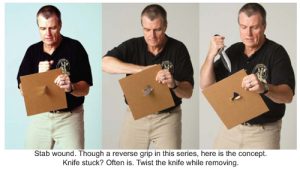 These things like the Cancer Grip are the little weird things that give FMA a bad name amongst MMA people, switched-on military people and so on.

Even the position of the knife hand, in junction with the wrist and forearm is important, but that is another subject, another essay. But again, on the subject of hand grips, I have written about his before, banged this drum before, time and time again. I’ll probably still get fan-boy, hate-mail by repeating this. And, the good news is most people know that you need as much hand on the handle of knives as possible, just a few FMA people do this silly, mindless thing. Anyway, as you can tell, this irritates the snot out of me.

My final prayer for you, “May all your enemies surprise you by being ignorant and untrained (oh – and may they use the Cancer Grip).”

Some additional comments from others:

Bill McGrath checks in on this, “I think my former teacher was the one that started this (cancer) grip. He didn’t originally teach it as a fighting grip though. The first time i saw him use it was at a photo shoot in 1980 at Inside Kung Fu magazine (simply to look more dramatic in the photo). He never taught this grip for fighting all the time I was training with him in the 70’s and 80’s. The only time this grip was used in training was when we used plain straight dowels as a training knife and we would use this grip just to simulate large cross guards for disarming purposes. But when we made training knives with built in cross guards we did not need to use this grip any more. We would use just the thumb raised at two times. One, when drawing a double edge knife close to your body, to act as a guard to keep the cutting edge away from you. Two, during a wrist lock; but even here you don’t open your thumb until after you have made contact with the opponent’s arm and just about to begin the lock. My teacher would also use the thumb open grip while doing live blade practice with students. But this was to act as a guard to protect the student’s arm from slipping down the blade. It was a little teaching trick to help students overcome their fear of a live blade, but still give them some protection from the blade. It was not intended for actual fighting. This all changed after my teacher moved back to the Philippines in 1990. Then he started to teach this grip as a fighting grip. Many things changed in his teaching at that time, but I don’t have a good explanation why. I can only say that that grip was not taught as a fighting grip when I was learning the system and it is not the way I teach using a knife today.”

Jorge Gonzalez checks in on this, “When I went to Sama Sama in England this summer, some people were having this kind of ‘grip’ while executing a drill . Tuhon Richard Sayoc, overlooking the training saw this, stopped the training and put us on a line after each other in front of a tree . ‘ Now stab the tree as hard as possible’ he asked . Grips changed naturally…’If I see any of you change your grip again you will be hitting that tree for the rest of the weekend.”

Robert Steven Boger says, “The art of stabbing without stabbing…Lol.” 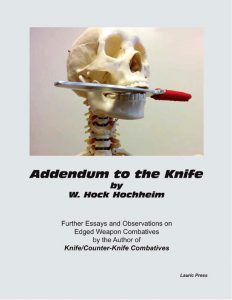 “Essays and articles I have written since the Knife/Counter-Knife book was published.” – Hock