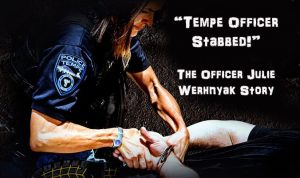 “Every day I donned my Tempe police uniform I spoke some version of the same mantra. “I expect and accept I will be involved in a lethal encounter today and I will do everything I can to ensure my survival.”

With 19 years on, that March day in 2015 was no exception. However, something FELT different that day. I couldn’t shake the eerie, persistent feeling that something terrible was going to happen.My wife Karin was our audit and compliance sergeant and our paths rarely crossed at work, but they did that morning. As I left her office she called me back and said, “Just be careful, ok?” This was quickly followed by her telling me she loved me. I later learned Karin had a bad feeling as well.

That morning on patrol was uneventful until my second radio call. Another unit and I were dispatched to a check welfare. The caller said a female acquaintance left a message for help earlier that day. The caller was now at the woman’s apartment and heard talking inside. When he knocked on the door, he thought he heard her scream.I arrived first on scene and contacted the caller. When asked, he said he was unaware of any history of family violence between the young woman and her boyfriend. He added, he is actually, “a really nice guy.”

Officer Latasha Hampton arrived as I continued gathering information. She immediately expressed an uneasiness about the call and advised she would be turning on her recorder. The two of us knocked and announced more than 17 times. We spoke with neighbors who reported not seeing or hearing anything out of the ordinary.My attempts to call the 23-year-old woman went unanswered. I left a voice message asking if she was ok. I then had dispatch text the same message and add that we were not leaving until we knew she was.Latasha summoned me to the back of the apartment. She was standing by the sliding glass door and said she heard music turn on and off several times. We listened. “Do you hear that? I hear him unraveling duct tape,” she said.

I ran back toward the front of the complex while calling for more units. As I rounded the corner, I saw a man with a panicked look on his face. He said, “Officer, officer, I received a text from my daughter. All it says is ‘I love you.’ Not that that’s not nice to hear, but I’m concerned.” This panicked filled man was the woman’s father. I assured him we were concerned too and we would do everything we could to make sure she was okay. “I’m hearing muffled screams from a female inside…it’s muffled as if something is covering her mouth,” Latasha radioed. I knew I had to act fast to break through the locked metal gate that protected the wooden front door. I didn’t have a halligan tool but the woman’s father had a tire iron that he handed to me.

While working to pry open the security gate, Latasha yelled hoping the woman could hear her, “Hang on, we’re coming to save you.” Within seconds Latasha radioed, “22, I hear her screaming inside!”

Back up officers arrived with the tools needed to breach the doors. We formed a stack. The sergeant made short work of the security gate with a halligan tool and another officer hit the wooden door with the battering ram. It didn’t open but the lower half shattered to pieces.I crouched to enter, peering into the apartment. Never was I so keenly aware of the drastic difference between the harsh brightness mid-day Arizona and the darkened interior of a home. The lights were off and the window shades were drawn. The sliding glass door on the far side of the apartment shed enough light to create a backdrop for the silhouetted scene that was unfolding.The suspect was standing over the victim. He reached high overhead and dropped his weight, swinging his arm as if he was striking her. Once. Then a second time. I realized I was not hearing any contact. He swiftly spun, looked in my direction and ran out of sight.“He’s running! To the right!” I said as I cleared the door. I hugged the left wall of the narrow entryway and waited for other officers to enter behind me. I held on the corner to the kitchen that was approximately 4 feet ahead of me and to the right. Both the entryway and the kitchen opened to the family room.

“Where is he now?” the sergeant asked as he entered. I didn’t know but believed he may have gone to escape or barricade himself. I pointed and said I thought he went to a back room. I began slicing the pie around the corner to the kitchen, anticipating a long threat. As I took one more step, the suspect, who was directly around the corner, leaped from the kitchen wielding a large hunting knife overhead. Evil itself had leaped from the darkness.

My immediate thought was, “Oh Shit!” not out of fear, but of knowing I was about to be stabbed. Try as I might, I knew I could not get out of the way. Crystal clear thoughts rushed through my head. I thought, “he killed her and now he’s trying to kill me.” Immediately followed by, “that knife is coming at a very strange angle.”The scene was now playing out in slow motion. At least in my mind. I began canting my body and moving to the right while simultaneously trying to block the blow with my left arm. My right arm was extending. My gun touched his body as I squeezed the trigger, firing my first round. At the same time, the knife penetrated the front of my neck, just above my left clavicle.

I sensed an invisible wave of energy between us that launched me backward. As I sailed through the air. I fired my second round and crashed to the ground. My head hit the tile floor and my shoulder was hurt. Other officers also fired at the suspect.

I instinctively sprang to my hands and feet and scrambled back out the hole in the shattered door. I ran for cover and radioed,

I was bleeding profusely. “He hit my carotid artery,” I thought. I focused on slowing my breathing and wondered if fire could save me. Thankfully, another officer was there to stay with me, comfort me and render aid. He called Karin and put her on speaker phone. When I told her I was stabbed, she said: “I know, are you ok?” Turns out she was listening to the call unfold on the radio from her office.

The suspect died at the scene. The victim was found bound, beaten and stabbed multiple times. She survived and later said Latasha’s words gave her hope.The knife missed my carotid artery by less than an inch. I was hospitalized for three days due to complications from the stab wound. I also suffered a concussion and a shoulder injury that required surgery.Several media outlets reported the “strange twist,” that the officer stabbed was a martial arts expert. There is no “strange twist.” The fact is that action is faster than reaction and if someone is hiding around a blind corner, in the dark and they jump out to stab you, you will be cut.

It’s What You Do Next That Matters! It was a miracle, and not a coincidence, that I survived being stabbed. I remained calm because I was Physically, Mentally and Spiritually Prepared, in the best shape I could be on that day and had fueled my body for optimum performance. In addition, I was 100% Present in the moment, which enabled me to fully utilize my extensive training.I also survived because I Had a Plan. I always made a conscious effort to identify my cover and concealment. In this case, I knew exactly where to go when I made my tactical retreat. Another part of my plan was to get outside the perimeter so Fire could treat me in the event I was ever critically injured, just as I did in this case.

My survival is also attributed to the police officers, dispatchers, firefighters, EMS personnel and hospital staff who were 100% Prepared and Present that day as well. I will be forever thankful to all of them! 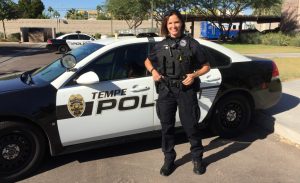 While my training prepared me for the incident itself, nothing could have prepared me for the aftermath; the chaos, both mental and emotional. I sensed I had lost my footing and was overwhelmed by the onslaught of attention from friends and acquaintances, to media outlets and strangers. There were people who didn’t know what to say and others who didn’t know when to stop talking. It felt highly intrusive.There were times where nothing that had anchored me before the stabbing seemed available to me as I struggled. All I had previously known as normal no longer existed. Karin and I were about to enter a journey of recovery we had not prepared for.  (Part 2 coming soon) 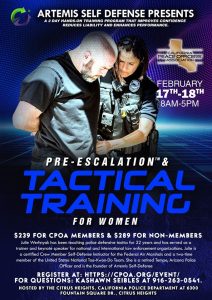