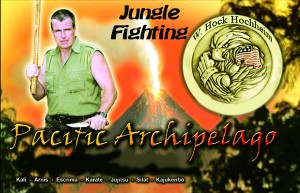 Archipelago means an expanse of water with many scattered islands. In this case, that body of water is the Pacific Ocean and the major martial islands are Japan, Indonesia, The Philippines and Hawaii. This hardcore Archipelago course is dedicated to the most combative aspects of ALL the island systems of the Pacific. Zero esoteric

“Think of all the great systems of the Pacific and the best things inside them! Karate from Japan. Kali Silat from Indonesia. Arnis, Filipino Stick Fighting, Escrima from the Philippines. Hawaii’s conversion of Kenpo / Kenpo. Kajukenbo. Warlike tactics of the Polynesian peoples who explored and settled so much of the Pacific. The Ring of Fire! This region’s history of military conflicts, each one is better than the other in different ways. It has always been this bigger Pacific collective of hand, stick and knife martial that I have loved. Never just one system. Hybrid practitioners-free thinking experts from several systems-simply produce the best fighters. The very foundation of this course is based upon that principle, to produce that type of free, hybrid fighter. ” – Hock

“Hey Hock, I’m at the end of one of two days of a “famous Filipino guy” seminar. Had an absolute blast, but I can barely remember a single thing. Thanks for making a system that’s as simple, straight-forward, logical, and professional as your PAC. I take you for granted sometimes until l’m reminded I can either memorize the 27 techniques of (insert foreign-sounding drill name here), both inside and outside variations, plus the advanced 13 extensions and 4 subsections, or I can memorize your four positions on the combat clock and get it all and never forget it! Hope you’re doing well.” –Don Young of Michigan

.No katas, anyos or forms. No redundant drills paying homage to endless lists of grandmasters where you are only repeating the same techniques over again under different names. No art for art’s sake. Nor will we use outdated and exotic stances, ideas or weapons. This is a combat course, not a history course. Train with Hock in seminars and/or in semi-private and private lessons, all in organized progressions. Plus-train with certified instructors in your region. Rank promotions, instructorships and recognitions are available, or just train for knowledge to augment your skills to support and enhance your system! We are here to inspire, not confine.”

Over three decades ago, Hock began amassing the most combative aspects of Filipino Stick Fighting systems and Kali Silat, attaining several black belts and certifications, strengthening it all with his military and police training and experience for a reality check. He has spent the last 35 years dedicated to finding the common threads, correcting and omitting sport aspects, artsy extravagances and isolating the very essence of combat. Hock reports he has never really felt comfortable forced to teach only one. He blended all these systems with his prior years in other martial arts like karate, kenpo and jujitsu and added his 23+ years experience in policing and military training. His years of teaching culminated into this hardcore PAC format.

Hock Hochheim has studied extensively with several instructors in the Inosanto family since 1986, most notably Terry Gibson of Tulsa, Oklahoma

The PAC Rank Levels: A Primer and Quick Overview

Information about requirements, organization and fees for instructorship available on the Scientific Fighting Congress Instructors page.

For more information about Hock’s Pacific Archipelago Concepts course or to purchase books, videos or downloads, maybe even schedule seminar attendance visit the link below.