Just stumbled upon a box of photos and odds and ends, and two of the photos were of me and Remy Presas, part of Remy's wish to make an Arnis stick book. In about 1994 Remy was staying at my apartment for a while. He had a book deal with (I can't remember, but they are long out-of-business now). He said we needed to take many photos. Jane came over, we dressed up and we took hundreds of stop-action photos of Modern Arnis stick progressions. (This was before the subsequent Tapi-Tapi craze.) I took the rolls of film to the camera store (remember rolls of film? Camera stores?) and had them developed. 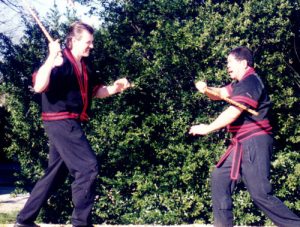 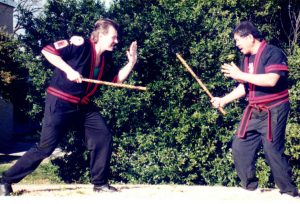 I've had friends beg me to give them any pictures, even out of order and they struggle like a puzzle to put them in order, to make a new book out of them. BUT…I know more than half have been lost since 1994. I still come across some scattered photos like these. I wish I had them, because I would make the book.

Reading this, omeone said “there’s history.” So I have added on the following. Here’s a double piece of Remy/FMA history. REAL history.

One of those nights while Remy was staying at my apartment, a movie came on cable television as we sat on the couch that was an incredible coincidence. Anyone seen “A Dangerous Life” with pre-motorcycle-accident, Gary Busy? It covers the …well read the review – 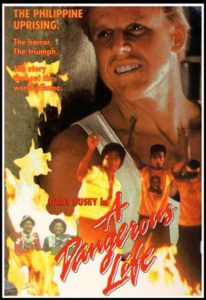 "a 1988 English-language Australian film about the final years of the Philippines under Ferdinand Marcos' rule, from the assassination of Benigno Aquino, Jr. in 1983 to the People Power EDSA Revolution in 1986 that ousted Marcos. The film focuses on American TV journalist Tony O'Neil (Gary Busey), who finds himself in the middle of key events that lead to the downfall of the Marcos regime. Originally airing on television as a mini-series that ran for a total of six hours, the film was edited to 162 minutes for the home video release. Filming of the movie took place in Manila, Philippines, Colombo, Sri Lanka and Sydney, Brisbane, and Melbourne in Australia."

It was especially mesmerizing to Remy as he blurted out little side stories to many of the big and small characters. I too, having already been to Manila several times, and having seen the palace, etc, found it engrossing, but not as much as Remy did. “He even looks like that guy!” Part of the sports end of this government planned on killing Remy for his disrespectful infractions to them. Another whole story I have written elsewhere.