Quick interview published by Håkan Linnarsson whilst in Sweden… 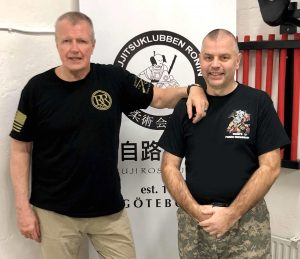 QUESTION: Born? Before my time…

QUESTION:What made you do martial arts?
“I guess seeing fights in movies and TV shows. Not necessarily martial arts movies, but other types of TV shows and movies. I saw the need to know how to fight criminals and enemy soldiers.”

QUESTION: What would be your best advice to someone who is thinking about doing martial arts or has just started?
“Try to determine what EXACTLY it is you are interested in from the start. Arts? Sports? Self defense? Investigate these differences. Deeply. And then pick your subject. Try to know the “who, what, where, when, how and why” of the system you are selecting and of yourself. What do you really want? What do you really need?” 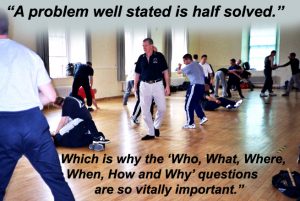 QUESTION: Which is your most joyful or ludicrous memory from martial arts?
“In terms of martial arts, back in the late 1980s, probably going toe-to-toe, and at times even beating my first very serious, freestyle, JKD instructor Ray Medina in kickboxing. Ray was a local kick boxing and karate champ and he took me from ‘zero to sixty.’ From a clown, to someone who could beat him. If you knew Ray, you know what that means to me. Ray took me out of the dark ages. Terry Gibson handed me a flashlight. 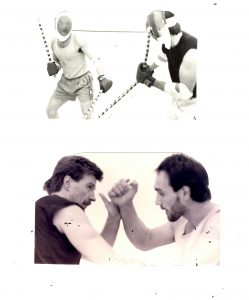 My most ludicrous moment was when a rather famous, pressure point, superstar in the 1990s tried to knock me over with a no-touch, ki/chi power. I didn’t move or blink. Surrounded by people, he had to say that my chi power was very strong. Well, no, I just wasn’t a hypnotized culty follower.”

QUESTION: Do you have any favorite technique?
“Just the best one for that particular, chaotic situation – moment. Unlike the Highlander movie expression, “there can be only one. In this case, ‘There CAN’T be only one.’ “

QUESTION: If you where to sum up “budo” and “martial arts” in one word, what would that be?
“Summing up? The terms “Budo” and “martial arts” are esoteric, artsy, abstract approaches to realistic hand, stick, knife, gun fighting. Crime and war. Arts are filled with distracting uniforms, ideas, misguided hero worship, misguided system worship, off-messages and confusing goals. So, these are terms I don’t easily relate to. But, you have to study and toil (with a very suspicious eye) in these arts and glean, filter the actual truths in fighting, but this takes time, real maturity, enlightenment, and an “eye” for seeking the truth that you really need. Tear down the curtains until you see the back wall. Everything is missing something.

So… for me… personally, summing up the terms “budo” and “martial arts” in one word? – the word would have to be… “distracting.”

Hock’s is email is HockHochheim@ForceNecessary.com

Get The book, Fightin’ Words, thousands sold around the world.