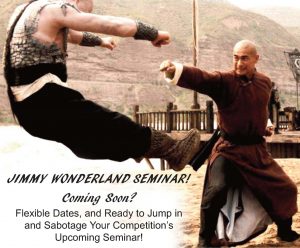 The seminar business. There are all kinds of martial arts and martial seminars, from little theme sessions on up to big multi-galas. I could do a seminar on the seminar business. I have no school. I just do seminars.  I started hosting martial arts seminars in 1990. Ernesto. Remy. Terry Gibson. Paul Vunak. Some other JKD people. I was attending all kinds of seminars since 1986. When attending seminars I observed how they were orchestrated. Advertised. The successes. The failures. I spoke to the sad hosts. The happy hosts. Around the world. Then I started teaching seminars, here and there, a bit in 1993 and big time starting 1996. I know seminars!  Remy Presas told me one time, a simple line I’d never forget-

As Kim Cattrell reminded us in the Star Trek movie, and I do not quote exactly, “Sabotage…to deliberately destroy, damage, or obstruct, for business, political or military advantage.” 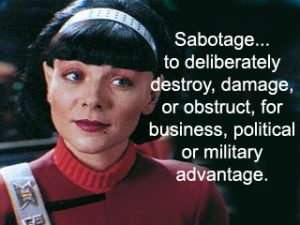 Many martial school owners worry about local seminars cutting into their businesses, in their area. When an area host organizes a seminar, it means that there is someone around the corner, so to speak, opening or growing a competing school nearby, scaring the emotional and intellectual hell out of them. Remember that martial schools struggle to draw people within their 5 square mile demographic. So when Ralph Jones hosts the famous Jimmy Wonderland for a local seminar, this represents a business, problem-challenge on many levels.  A threat even. They might lose students and prestige. Students might meet Ralph and like him! Students may love Wonderland’s methods and want more!  Ironically, if Jimmy Wonderland was appearing just outside their area/region, these anxious owners might even go to the seminar. Might display that certificate on their office wall. But a little too close? Nope.

Thus…the seminar sabotage game begins. Since the 1990s right on up to this VERY month in 2019, I am still very much a victim of these turf plots. The biggest method of sabotage? Why, another seminar! Suddenly throw a “mandatory” or guilt-attend seminar the week before, or on the very weekend of the seminar you want to sabotage. I have seen the term “mandatory” used and the “guilt-guilt-must attend,”  verbiage and message. I have lost track of how many times this has been done to me.  Multiple times a year for 24 years. Right up to this month.

The week before so bad? Yes. The seminar sabotage plot of the “week before” takes discretionary money and the pressures of family time. When your seminar comes up the following weekend, attendees extra money was spent and the spouse says “Dammit  Earl, you were gone all last weekend.”  At times, Jimmy Wonderland will travel into the very school you are going to the next weekend, with his mandatory edict.  Plus, there is this – “get there first,” kind of natural urge.

Back in the late 1990s, it was always puzzling to Keith Miller and me that every time I was appearing in Sacramento, CA, which was sometimes twice a year, a local JKD guy – “Winston ”- was hosting Jimmy Wonderland. So, Keith and I ran a little experiment. Keith announced a date for us, well in advice. Mysteriously, Winston popped up with the same date. Prepared for this, we changed the weekend. So too, did Winston and the Wonderland date changed. We let that date set a while, and being prepared for this, we changed it yet AGAIN!  (What an experiment!)  I guess maybe Wonderland didn’t know of all this local tomfoolery by Winston, or…perhaps Wonderland himself ordered him to do so? But either way, they never changed the 3rd date and we worked around that.

Probably the worst I can think of was when a police officer in western Canada, who fancied himself an international instructor, who did little more than regurgitate failed 1990s ideas, found out I was headed to his big island.  Witnesses and the host said that he was caught ripping down the seminar fliers everywhere they were  posted.

Stories related to this theme abound. One of my favs is the one about the two guys asking their teacher to attend a regional, Wally Jay seminar. The school head says no. Upset by this the two lads sneak to the seminar anyway. Who’s also there in attendance? That school head!  Awkward! This is a classical, martial arts,  clap-trap, but still goes on in more modern organizations. Last year a host and I were looking out the front window just before a seminar start time, and he saw a certain car go by. “That’s Grandmaster Flash,” he said. “He’s checking the parking lot out.” We had several of GM Flash’s people secretly in the seminar, I later learned. They have to hide their cars and dodge all group photos. GM Flash’s school is not too close either.

This very year, overseas, we had an area school head (cities away) call up our host and virtually demand that we save 7 slots for he and his people, for my seminar. (We had a limited space up to 25) “We’ll be there!” he promised. Then he scheduled Jimmy Wonderland for the SAME weekend. “What if I wasn’t watching the area news?” our man said. “I would have held open those 7 slots.”   He didn’t . He knew it was…sabotage…

Unlike this host, I do get a kick about some of the business naivete of some hosts. When we discover that the area Snidely has suddenly, mysteriously,  and “hmmm, not-like-him, or not-like-his-usual-scheduling,” scheduled a seminar the week before ours or on the same weekend, and your host says, 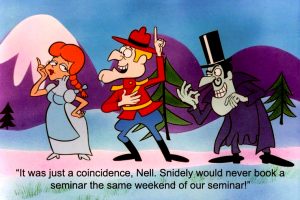 Kumbaya? Bubba…chances are, it’s a business sabotage. Coincidences can happen, but more than likely no. Hell no, your nice guy is suffering from business paranoia.

As for me, I don’t care if you attend Wonderland’s seminars. For me, the more you are trained, the easier my job is and the more we can do, and the faster we can go in seminars. Just spread these events apart.

Don’t misunderstand me, I am not the Svengali of the seminar business. Seminars are very much like a Vegas crap-shoot. You never know all the factors involved and the luck factor. One weekend I had 67 people in upstate New York, and the next weekend 6 people in Texas. Crap happens. Some of the BIGGEST world touring names have and still have disastrous turn-outs. You just don’t hear about them.

And to all you Snidelys out there? Just so you know, I know who you are. I know this Palace Intrigue report doesn’t sabotage your sabotage. But, we know. I do understand your paranoia and sometimes vindictive motives. You may trick my naive hosts, but only once. And, once alerted, we may move the date, screwing you around. Once. Twice? Three times even. You remember the “Whack a Mole” game? We can play, “Whack a Wonderlander.” 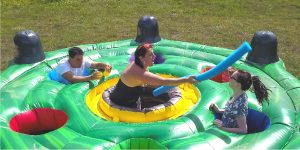 Plan your attendance (or sabotage) early, look here for seminars 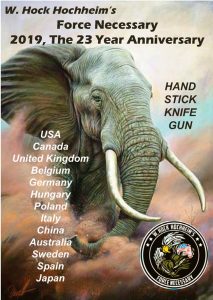