As I turned on my car radio this morning, the very first line I heard was “G. Gordon Liddy died, age 90.” 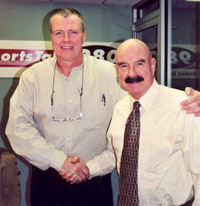 I once described my friend G. Gordon Liddy as a great “American Story,” among a list of other unique folks, in a piece I had published years ago.  Think about it. The G-man was an FBI agent that once caught a Top Ten fugitive, and had a FBI record quick draw on their range. He was a state prosecutor, federal prosecutor, Army “arty” (as in artillery) captain, Nixon Watergate spy, state jail prisoner, federal prisoner (whose inmate lawsuits changed the systems he was incarcerated in), father of a Navy SEAL, TV series star, movie star, radio talk show host, author, gold salesman…well, I could go on but he qualified with me as a great, diverse American story. Of course some people angrily complained he was just a criminal, but he really did a lot more than that.
I first saw him in person, in the late 1980s, in a lively, fun debate with LSD promoter Timothy Leary at the University of Texas in Austin while I was down there attending a state police school. Years later, he liked my books and for a period of years while he had his show, every time I wrote a new book, he would have me on his national radio show as a guest. Lots of radio show guests could “call it in” from their homes, but I flew into D.C. every time just to hang out with him. Whereupon, off the air, lunch etc., I could interview HIM! After my first visit in the 90s, my webpage exploded with views, and really has not gone down since!
When there, we would swap police stories and he told me many of his escapades including some great FBI stories not known to the general public. He also never believed that J. Edgar Hoover was “a ballerina.” He too was an author of many political books – like the bestselling book “Will” (made into movie), but he also wrote some bestselling spy novels. His writing style was very proper and succinct. Whereas his non-fiction, politic books were as fresh as his easy conversation.
In recent years, show gone, his old age, we lost touch, dwindling emails as he disappeared from the “scene.” His mother lived to be 100 or a bit over, and I expected the same longevity.
WHAT a character! Some people hate him. Some don’t . I guess most people today might remember him from those “GOOLLD” tv commercials, and maybe, if old enough, from the Watergate scene where he held his open hand over a candle, expressing his commitment not to “talk.” I reckon that most younger folks won’t remember him at all.
I certainly…“will.”
Read more. G. Gordon Liddy’s Will
Hock’s email is HockHochheim@ForceNecessary.com
Read Hock’ s latest western, click here!