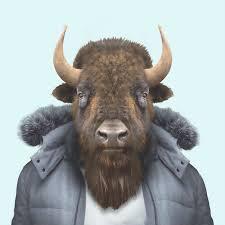 I wonder…do people know why so many folks have big bison-buffalo beards today? What caused the more “recent” …beard fad? Craze?
A burst of beards? A “burst of beards!” (Is that an official term of venery?)

I like to ask these origin questions once in a while. Who made or kicked off what? It fascinates me, these human nature addictions.  Like who created the Krav Maga craze? It was Darren Levine out of Los Angeles in the 1990s, and like… a million or two dollars in advertising. Many Krav people say, “Dar… whaa… who?” Best thank Darren, not Imi for Krav Maga! They don’t know these things. Or, I ask, why do these dudes walk around with their pants half down on their butts. Prison, homosexual signal. Underwear, displaying, fashion people say, “wait…what?” Origins. How did Japanese Jujitsu become Brazilian Jujitsu – to the the point now when a younger person says “jujitsu,” they only think of wrestling? Origins? Splinters?

So, on the beards, why are so many people running around these days with buffalo beards?  It was/is a unique run kicked off again from the post 9-11 special force guys in Afghanistan, From these early 2000s photos sent back to the USA. It was somewhat common knowledge back then that these guys had to communicate and work with local, long-bearded cats over there and it became beneficial, much to the chagrin of many clean-shaven, US Army traditionalists, for these guys to grow insane beards. Pictures just like this one here. 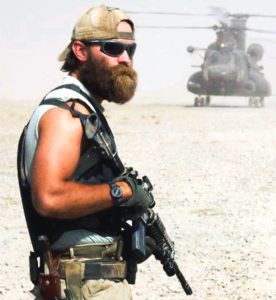 “Back in the day,” in the ol’ Army, one had to acquire a “profile” to have a beard, as in a medical profile. Your facial skin was so screwed up you couldn’t shave. It seems like a few folks had such profiles, to the consternation of the “head shed.” (Head Shed being a nickname for “command,” “HQ” thee…officers in charge, etc. Could also be the NCOs too! The…sergeants.) We were jealous of these profilers. We wanted fuzz too! Just because it was outlawed. But, the profilers  couldn’t grow complete full buffalo beards, so they had, what would later be recognized as the Miami Vice/ Don Johnson look. These fuzzy profilers especially ticked off the drill sergeants in Basic Training.

Formation scene – Drill Sgt. in front of profiler:
“Private Ass-face! Your face looks like a hairy ass!”
“I have a profiling problem, Drill Sergeant.”
“I have never seen a problem that couldn’t be solved with a hand grenade!” (A magnificent line I used the rest of my life, by the way.) 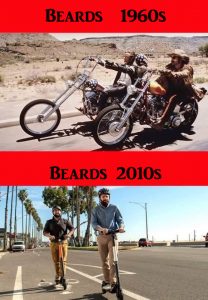 And by the way, all would agree if you were alive and cognizant in the 1980s, that Don Johnson of the Miami Vice TV show, started the whole close-shave, fuzz-beard craze of those times. Further evidence that beard fads exist. But I digress. 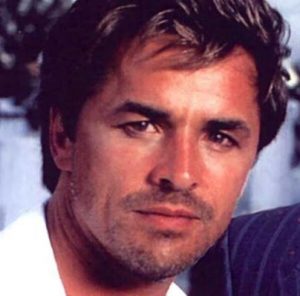 Still, in Afghanistan, in the 2000s, special guys had beards. Minus any medical profiles. Forward operating base guys had beards too (who could shave sitting on rock ledge watching idiots test-probing and outflanking you all day and night?)

Then, seeing these action-guy photos, the wannabes, state-siders, started growing thick, long beards too. Seriously, we saw it happen. 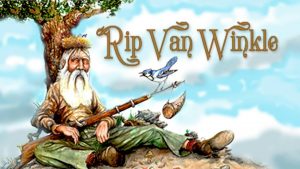 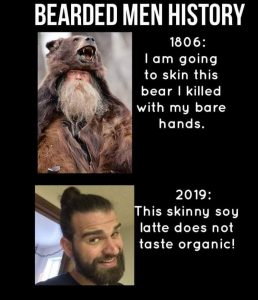 Another old school nickname for a thick beard is a “crumb-catcher.” I for one, who can’t get the smell of a cheeseburger out of my car, would not want to eat while sporting any beard inhibiting my eating and hiding my mouth, or catching the hidden plastic pieces in Subway bread, or May – God  Help  Us,…plastic straws.

But, in the tangled end, I really, really  don’t care what you do, it’s fun sometimes too look at the recent origins of things and see how fads get started and what becomes of them. 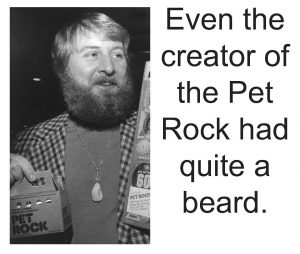 Fads. I still have my pet rock. But, I had one before they started selling them, though. So…you know, I’m cool. Hey, the guy who invented the pet rock had quite a beard too. I guess I will have to settle for a Chia pet to support the cause. There’s an ironic theme in here somewhere, that I, unlike Alexander the Great,  am unable to grasp… 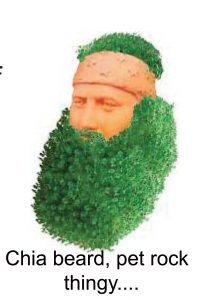