Just a short history about the evolution of courses I teach concerning the stick/baton//impact weapon. I started out with the police baton “back in the day” the early 1970s, when there was almost a “no-holds-barred” with wooden stick, police use (especially in the military police.) The police baton was used to hit, block, shove and capture/grapple with. I was certified in the old 1960s -1970s, Los Angeles Police and Los Angeles County baton courses and much of this material was excellent. In the 1980s I became involved with Jeet Kune Do and Filipino Martial Arts (FMA) , as I, like so many others, was on the hunt for any and all martial arts. 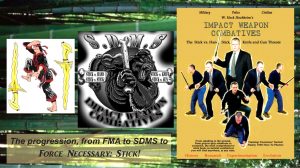 The FMA stick, which was supposed to replace the FMA machete/sword for training is 3/5ths of a comprehensive FMA course, the 5 being-
The “stick” appears in three of those 5 FMA subjects above.
* Single Stick
* Double stick
* Espada y Daga (stick and knife)
The single stick category seems to get all the shine, attraction and interest, which to me (and Ernesto Presas teachings) is an imbalance of FMA study. Next the puzzling and fun, addiction of double sticks, and then last, the often ignored Espada y Daga or stick-and-knife.
But I always knew from a practical, reality standpoint, a self defense survival standpoint, I would not be single-stick or double-stick dueling with criminals in an alleyway somewhere. As I like to remind people, how likely is it that you will be in a stick fight with your 28” stick, fighting another cat, coincidentally holding another 28” stick, down on the corner of 8th Ave and 4th Street? Statistically unlikely to none. Why do this then? Mostly fun/ Mostly hobby.
So, through time I had to pigeon-hole, classify “the stick” as in hobby, as well as workable, common sense arenas. The progression was as follows – 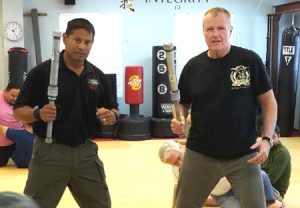 Tim Llacuna and me with padded sticks.
I was challenged with – how do I collect this, disperse the information, in the best, smartest way?  I fly no flag, so to speak. No established system name that garners automatic recognition and students, which is a terrible deficit in the martial “arts.” For business examples, look at the automatic, purchased appeal of “Krav Maga,” or “Tae Kwon Do,” (or Walmart and Domino’s Pizza). But the process starts with a clever name, and I first wanted it to be “When Necessary? Force Necessary!” But it was too long a title, and a bit clunky, not too sexy, and it quickly de-evolved from 4 words to 2 words, down to “Force Necessary.” Using only that force necessary to win and/or survive.
It then made sense to make 4 courses, Force Necessary: Hand, Force Necessary: Stick, Force Necessary: Knife, Force Necessary: Gun. And, it must have within them the “hand, stick, knife, gun “versus matrix,” so the Force Necessary: Stick course must contain –
This is how the Force Necessary: Stick course and title was constructed. Police no longer leave the class or seminar anymore. Actually they seek it out, in as much as batons and expandables are used today. Police batons are not popular with many agencies fearing public perceptions. 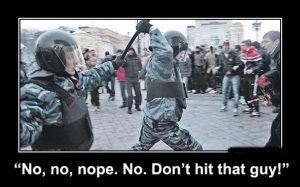 And in the context of the Pacific Archipelago Concepts/FMA course, I still do FMA stick stuff when asked, when planned and when I spot a high interest clue (one interest-clue – when a preponderance of attendees show up with Filipino stick bags. THAT’s a clue! ) We do them for fun, exercise, culture, history, hobby and abstract benefits. I also use a very combatives progression, a “fight-first, systems-second” mentality I picked up from Ernesto Presas.
The martial arts and systems I have worked in are to me, like colleges I attended. My beginning interests and end-goal, obsession always was and is the seamless transition of hand, stick, knife, gun.
Clean. Generic. Style-free.
^^^^^^^^^^^^^^^^^^^^^^^^^^^^^
Hock’s email is HockHochheim@ForceNecessary.com
Check out the FN: Stick! downloads and books 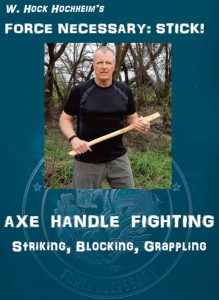