Don’t Headhunt? The “Third Round is Yours” Theory and Any, Better, Best Target Theory

Don’t head hunt! This was advice I had been given for decades by various boxing, some kick boxing, and even some Thai boxing coaches. I think they always really meant to say, don’t “overdo” headhunting, as in spending  all of your time, effort and strategy trying to strike the head. Strike other places too, as well as kick in kickboxing and Thai. You do this to hurt the guy, confuse the guy, wear him down, etc.

By the way, this is not a debate on fist versus open hand strikes. Not all fist strikes to the face break your hand. Not all palm strikes are as good as fist strikes. And elbows too! These particulars are for another topic This is an essay on headhunting, with a side-serving of weapons and targets.  I also have been clocked by classic punches, and have seen classic “boxing/kickboxing” punches wipe out my partners, as well as other soldiers and citizens. There is nothing wrong with “the proper punch,” but maybe how and when to use it and here’s when the coach comes in.  Champ Bas Ruttan advises to palm strike a trained fighter and punch the untrained fighter.” How they stand before is a clue to this assessment.

I am fully aware that some of you may have different coaches and trainers that told you otherwise, or maybe never mentioned this subject. But don’t act shocked, I have had some coaches across a pretty wide spectrum and the “don’t headhunt” advice is not too rare. Many boxing coaches are also interested in spreading the art and sweet science of Boxing, which includes many things. 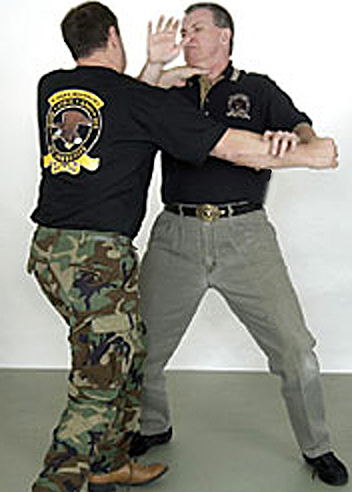 Even when rare, the “don’t always headhunt,” advice fits best inside the sport world, where there are rounds, time and wear-down strategies and declarations by trainers mapping out the fight that the “third, (or whatever,) round is yours.” In the contest world it suggests –

“First round? Check him out, probe. Probe with the jab. Second round do ‘this or that’ with the discoveries from your probing. Third round is yours.” That’s the idea in the most general of terms.

It is their job indeed to map out the fight, to give you a game plan. You know that in amateur and pro fights, where a history, film, even now prolific video exists on an opponent, those films are studied and strategies evolve. A properly prepped, fighter, MMA or otherwise needs to walk in with a strategy, a plan. And in this process, the plan is made and you might hear “fourth round is yours,” kind of talk. Or ideas about tiring him out in amongst the battle plan. I think it would be odd for a coach to simply say, “knock him cold with a head shot in the first two seconds. That is all.” Fighters do indeed knock people out quickly, but inside the mandatory, overall, planning, the staging, etc, not all of it is headhunting.

I think the non-head-hunting idea from coaches was meant to say – also deliver body shots too and kicks too in kickboxing, to weaken and confuse the opponent in round one and round two for the theoretical victory in Round 3. In one example of body shots, there were numerous successful and unsuccessful boxers who spend rounds pounding the upper arms of their enemies so that eventually their guard would consistently drop for their eventual, head shots, so that “the ______ (fill in the blank) round is yours.”

The transition of these delay ideas and advice can get blended over and into, for lack of a better term, “street fighting,” training by short-sighted trainers and coaches. I was told these off-mission tips at times in several self defense courses and that included boxing methods. For examples:

Ignorant at the time, this was not a mental dilemma for me until I started working as a cop and grasping the idea that “there was no third round in the street fight,” to use a corny phrase. Nor second round for that matter. These street fights/arrests I was in and ones I had to break up and/or investigate had little time for the experimental probing jabs and “third round, wear-him-down, ring strategies.” They were usually hard, fast, crazy and over quickly. You were bum-rushed, tackled and sucker-punched, hit with chairs and lamps, etc…I was attacked by a man with an ax once. No time for several probing jabs and slick footwork versus the ax man.

These official, wear-him-down, delay strategies seemed to be inherent in several martial arts I did, in ideas, big and small. I called them “sport cancers” to be on the look out for in all transitions from sports to the non-sports world. Enlightened coaches look for these. What works on who, on what, when, where, how and why.

Another popular idea in this mold was:

To me this falls a bit into the “third round” category, because it promotes lesser shots on lesser targets. Who knows who originated the “closest-closet” concept, but I will take a good guess and tell you it is probably not who you think it is. It goes waaaay back. It sounds so good too, but, what does it precisely mean?  Exactly? Define weapon. Define target.

Taken literally, if I am struggling with with you, and we are bent in a weird position, and my elbow is near the right cheek of your butt. Is that my closest weapon to your closest target? And I elbow your…ass? If this idea is unacceptable, then shouldn’t the motto read,

“your best weapon to his best, closest target?”

If you accept the term “best,” into the motto, because elbows to-ass-cheeks is kind of worthless, it changes a lot of the original, cool intent, doesn’t it. Even the word “better” changes the intent of the close-close motto. Better? Maybe the motto could read –

It suggests that of you wait just a second, a better or the best target may turn up. I don’t want to get overly semantic here, but this “closest to closest” quote never impressed me. Many cutting-edge, sports performance experts promote the idea of “waiting,” if just for a half a second or so, for the best point in time to maximize/execute their effort. (Do read the book, Waiting, full of this research)

Juxtaposed to this wear-him-down strategy, were other strategies I learned. I spent some time with a retired, South African commando, who these days wishes to remain low-key. He said that “military knife fighting is about the neck and the head.” He said this due to the vests and the gear common to enemy soldiers. He also said that this “head and neck” idea relates to empty hand and survival fighting. Head hunting and neck hunting is good hunting.

To me, headhunting is important. So, too is neck hunting. Even though as a cop I couldn’t prioritize this until my struggle escalated to that justifiable point. Hitting the computer (brain) and quickly, and hard, is such a great idea. Hitting the neck, its whole circumference, can be so good too. No need here for an anatomy lesson I hope. Blood on the sides. Wind in the front. Electricity in the back. Boom! (And I include chokes in neck hunting category, too.)

I’ve made the smart ass remark for decades,

“what the best martial arts technique? A punch to the nose. What’s the second best? Two punches to the nose.”

Everyone laughs. It’s a generalization, but it makes a point. As I said earlier, I think these boxing and kickboxing coaches always mean to suggest, don’t “overdo” headhunting, not quit it. There are many, many boxers, MMA and kickboxers who emphasize the head and are quite successful. Who doesn’t think Mike Tyson was a head hunter? Who doesn’t think that Iron Mike ignored long-term strategies and tried to knock the other guy out in seconds?

The overall boxing and kickboxing strategies? Strike in combinations and heights – as well as kick in kickboxing and Thai. You do all this other stuff to hurt the guy, fake, confuse and set up the guy or gal and/or wear he or she down through the designated rounds. I get it. I do. This still boils down though, fighter-by-fighter and their favorites and styles, and the sports/rules they follow  in the end. Through however many rounds.

But, the “third round is yours” and “any close weapon to any close target” ideas are not ideas for fighting crime or hand-to-hand, trench war. So, for the citizen, cop, soldier, survival fight, I personally believe very much in prioritizing head hunting and neck hunting, standing or on the ground. Fake, hit, stomp and kick where you can too, but jeez…that solid head shot? Solid Neck Shot? The choke? Hard to beat. Better or best weapons to better or best targets.

All roads lead to the head hunt? The neck Hunt? You could say. Serious business. Do not stop boxing or kick boxing. It is a positive in so many ways. It is important. My brain damaged head misses doing it, and I’ll be 70 too soon.  But pay close attention and think about what all the coaches say. Be on the lookout for sport cancers, big and small.

For more discussion on this topic?