It’s hard for many to escape what is now called Post Traumatic Stress Syndrome/Disorder at some level if you let yourself think of trauma you’ve seen or felt. It seems to manifest in so many different ways. Can anyone truly escape it? With me, I might be all screwed up because, frankly, I don’t know what normal is. I have my jacked-up moments. My nightmares. Brain damage. We think we are okay, but I have seen much crime in person and know of so much crime and war otherwise. 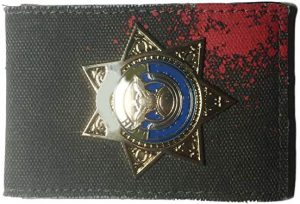 I’ve learned in my life that people’s faces are just masks that they trot around behind. These masks all float around you day by day. What they really think behind their masks, what they really do when sight-unseen is a mystery. It’s a mystery to a detective. And what stress and what pressure will cause them to pop like a vomiting blister is anyone’s guess? If you work in the profession long enough, you learn to live among this angst. One thing? Very little surprises you.

Billy Bob Thornton calls it, “angst and shit.” What angst is left that haunts me still? Haunting? Haunting me is…a wallet. Through the years, I have removed many wallets from the pockets and purses of dead people. People who have been blasted, decapitated in car wrecks, shot or stabbed. Some wallets smothered in blood, or stinking, or crawling with maggots. Suicide victims, accident victims, murder victims and people who have just flat collapsed from natural causes.

You open the wallet and find the dead person’s history. You find out who they were. Where they live. How they lived. You find out to whom you have to deliver the death message. You have to find out how they died. Then there is the revenge part, oh, oh excuse me…justice.

Sometimes when I open my wallet, I catch myself thinking about this simple act of opening a dead man’s wallet. It all comes to me in a rush, a blur, as if all turmoil filters down into this one symbol, a wallet. And, I can’t help but imagine an officer or medical examiner’s investigator, EMT? Someday, later? Ten minutes later? Three hours from now? Next year? Ten years? Looking into my wallet, looking to discover who I am, and who to call about my death, following the very steps and routine I’ve had to do so many times.

I don’t usually remember my dreams, any more. But when I do? In almost every one, I am a cop again, patrol or detective. Trying to solve unsolvable problems. In a human rat-maze I only half recognize. In a city I half recognize. Abstract chaos. Half nightmare, half dream. Sometimes I shoot bad people in my dreams. When I am shot, the instant before the bullet lands, I wake up, in a gulp. 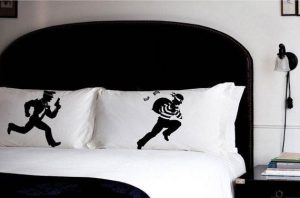 Then I stare at the dark ceiling for a bit. If I drop back to sleep again, will I return to that instant? Will the bullet hit me? Last night I dreamed an armed robber tried to shoot me with a machine gun. I shot back and my bullets went slow and askew like weights on a cast, fishing line. I was sure a goner in that nightmare.  Dreams and I are not friends. I have to sleep, but it is a very unfriendly district to work in. Still…I report to work there.

When these feelings come over me as I put the wallet back in my back pocket, I try to put it all behind me too. But sometimes I am caught thinking about the shortness of life. The random, consistent tragedy. Some people like to say that death is “God’s Will.” Makes them feel good to think there is a plan in place. But, “God’s Will” is all past tense, chin music. Some people really need an explanation that there is a special, master plan to excuse all these disgusting horrors of the world since human beings first started their trotting upright. I don’t think there’s such a grand plan, though. Not like that.

I think the “God-head,” the “Intelligent Designer,” whatever, was worried more about establishing the trees and not worried that much about the leaves. The leaves? Us. We just blow every which way. That is the sorry plan we’re left with down here on ground zero. Bob Dylan said it once, “The answer my friend, is blowing in the wind.”  But, that’s no answer, really. The wind? Hell, that’s just a direction.

I use to call police work “social sanitation.” I’ve spent a goodly portion of my life with a social rake in my hands, piling up social leaves in the social wind, and I can’t help but wonder sometimes which way this wind blows, where all the leaves end up, and when I am “dead right there,” who will be the last person that has to look in my wallet and try to figure out who in hell I am?

This is excerpted from Hock’s book Dead Right There.  Get the paperback. Get the ebook download 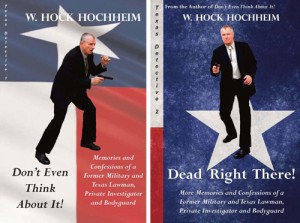