There’s a lot of people writing wonderful things about former Denton County Sheriff Benny Parkey. I could add many more things because we go back quite a ways. Too much to say. Lots of people sharing photos of them with Benny. Here is one of us in the 1990s. I feel like I need to vent over this. 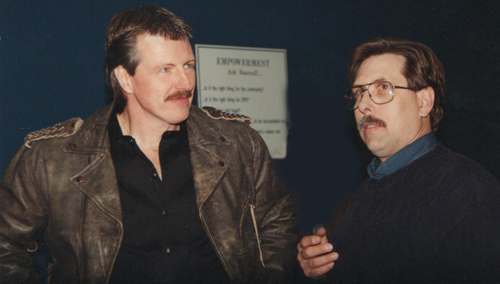 We worked together for years on the same detective squad. When some people say if Benny was your friend he always had your back. “Regular” people have certain definitions of “having your back,” but Benny really has had my back many times. Benny is one of the few people I could list on one hand that if I was in real trouble, or if my family was in real trouble, I could call him, day or night and he would show up with a gun. And I mean that, and I am also sure he would have still shown up if I called him the very last week of his life. Yeah. Somebody would have driven him, but he'd a come.Think about it. You know he would have.

But we worked cases. Did karate. Chased bad guys. For years. We were dedicated “street” workers, saying and swearing to each other we would never take any promotion test and become supervisors. I eventually left the P.D. to run my training company. Then I caught wind in 2004 or so, that he was…running for sheriff? I called him and asked him about it. We met for lunch to talk about it and he said,

“well, I decided I don’t want this detective job to be the sole mark of my life.”

Okay. So, I jumped in. Tried to help where I could. He won in a tough election battle and run-off. The next election he ran unopposed. Then the next election a flashy skunk ran against him. And I swear, he ran with a bunch of lies and scam presentations and Benny lost. I think if it weren’t for this outsider, showboat buffoon from nowhere, Benny would have run unopposed again, because everyone in the county knew to leave the well-liked Benny alone. But anyway, while he was there in office he was a terrific Sheriff. And he did terrific things. Then his wife died and he was… well, grace personified. Then sweet Jesus, somehow HE got bad sick with a cancer. I was mortified. We all were. And he was gracious and calm to us about it all.

I saw him for lunch a few times these last years, knowing full well he was bad sick but just never fully realizing how soon things would end. I mean, not long ago, like two weeks ago? He was walking around saying he would soon need a cane.

He wrote to me very recently that his days were numbered, he would soon, “slip the veil,” as he put it and said "goodbye." I am pretty inept about such things and I didn’t really know what to say to that, except to talk about a future lunch. A lunch that never came.

Benny Parkey. Class act all the way- Texas style. Special. And he did indeed leave his mark as a great Texas Sheriff, didn’t he. To me though, personally, he will always be a real bloodhound investigator and friend – as Gus complimented a feller in Lonesome Dove once – “he sure was good company at suppertime.” Which symbolizes a mighty compliment.

(Benny, me and Lonnie Flemming working a murder back in the 1980s.)